The low-lying areas in north Chennai including Madipakkam, Kovilambakkam and parts of Tambaram continued to be grim till Friday night. 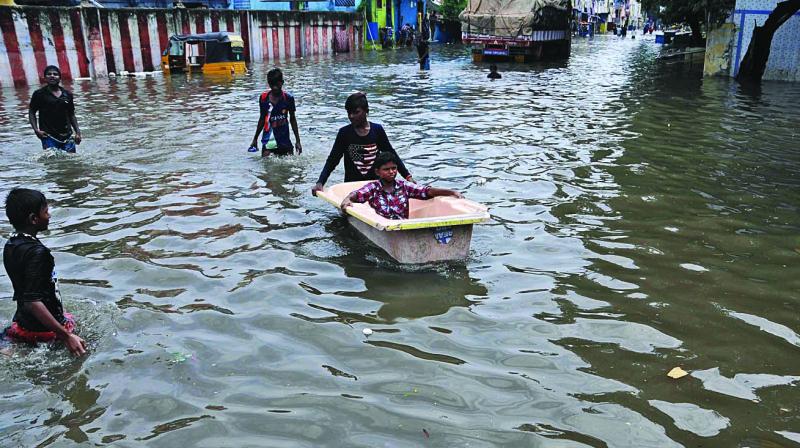 A boy pushes another in a bathtub in a waterlogged street in Chennai on Friday. Incessant rainfall caused waterlogging and jams in several parts of the city. (Photo: AP)

The rains that began at 3 pm on Thursday continued till the small hours of Friday resulting in water-logging on arterial roads including Mudichur, Kovilambakkam, some parts of Tambaram and Madipakkam.  However, the water on major roads receded on Friday morning.

The city received nearly 30 cm rainfall in less than 24 hours with the Marina beach area recording the maximum 29.6 cm rainfall between 8.30 am on Thursday and 8.30 am on Friday with beachfront and service lanes.

Six people died in the city owing to various rain-related incidents. The electricity supply was restored on Friday afternoon. The low-lying areas in north Chennai including Madipakkam, Kovilambakkam and parts of Tambaram continued to be grim till Friday night.