CM Shivraj Chouhan takes note of the case, a policeman is arrested 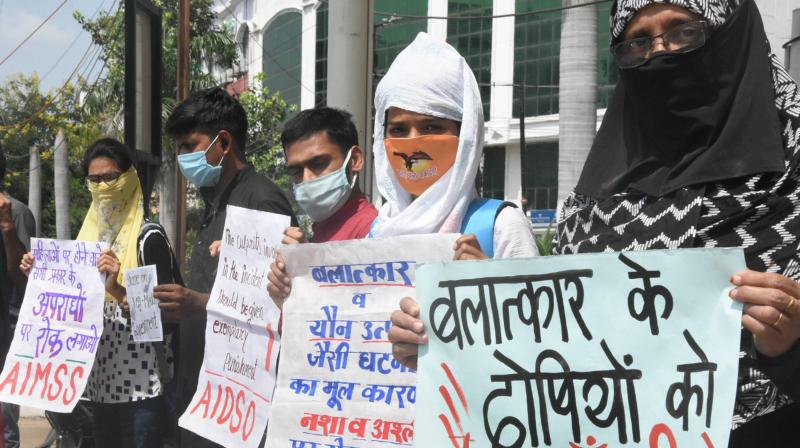 Activists of All India Democratic Students Organisation hold a demonstration in Bhopal demanding justice for gangrape and murder of a 19-year-old Dalit woman in UP's Hathras. — PTI photo

An alleged gang rape victim in a Madhya Pradesh village committed suicide over non-registration of FIR in the case by police.

The 33-year-old woman, who was allegedly gang raped in her village of Gotgoria under Narasinghapur district on September 28, was found hanging in her house on Friday, police said on Saturday.

Her husband said she took the extreme step when police refused to file FIR in the case, besides harassing her kin for asking to register FIR in the incident.

Two police officers were arrested for not registering a case in the incident.

“In-charge of Gotgoria police outpost Misrilal Koddape and in-charge of Chacheli police station Anil Singh were arrested for lapses in registering the case. They were booked under section 166-A (non recording of information) of Indian Penal Code (IPC).

Besides, 3 other people were arrested on charges of rape and two others arrested for instigating suicide (of the victim)”, Narasinghpur district superintendent of police Ajey Singh said.

The deceased’s husband told the police that his wife was gang raped by three local villagers, Parsu, Arvind and Anil, when she was cutting standing crops in a farm land on September 28.

She narrated the incident before her family members when she returned home.

Later, the family members took her to the Gotgoria police outpost to lodge a complaint on the night of the fateful day.

Gotgoria police however said FIR would be registered after her medical examination.

However, the complaint was not registered by Gotgoria police on September 29 also.

They then approached Chichli police station to lodge the complaint.

However, instead of registering the case, the deceased’s husband and her brother-in-law were locked up in the police station, her husband said.

The harassment by police had provoked her to end life, he added.