In May, seven persons including three policemen and four civilians fell victims to unabated target killings in the Valley 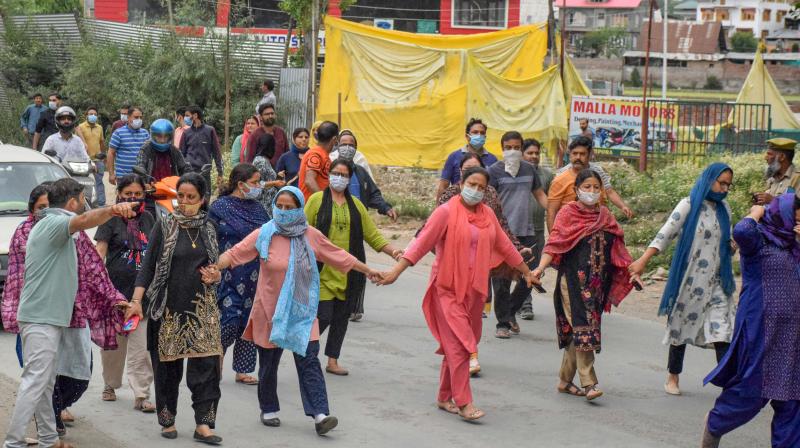 People from the Kashmiri Pandit community block Srinagar-Budgam road to protest against the killing of the school teacher Rajni Bala, near Srinagar Airport, Tuesday, May 31, 2022. (PTI)

SRINAGAR: As targeted killings continue in the Kashmir Valley despite the authorities’ assertion of an improved security environment, a bank manager from Rajasthan Vijay Kumar was shot and critically wounded by suspected militants in southern Kulgam district early Thursday. He died on the way to hospital, the police and hospital sources said.

On Wednesday night, the gunmen had injured a local resident Farooq Ahmed Sheikh in a similar attack in neighbouring Shopian district. On May 31, a female Hindu schoolteacher Rajini Bala was murdered outside the school she worked at in Kulgam’s  Gopalpora area. In May, seven persons including three policemen and four civilians fell victims to unabated target killings in the Valley.

Giving the details of the latest attacks, the police and local sources said that Kumar who worked as the head of the local branch of the Ellaquai Dehati Bank, a rural bank sponsored by the State Bank of India, was targeted by gunmen at Arreh Mohanpora in Kulgam. The grievously injured Kumar was evacuated to the hospital where he was declared dead on arrival.

The J&K police along with the columns of the Army and Central Reserve Police Force (CRPF) has launched a search operation in the area to capture the assailants dead or alive. A police spokesman said, “A massive manhunt has been launched for the terrorists who killed the bank manager in cold blood.”

Earlier during the day on Thursday, three Army soldiers were injured, one of them critically, in a blast inside a public transport SUV being used by them for an counterinsurgency operation in Shopian.

Defence spokesman Emroz Musavi said that the blast in the vehicle took place at around 3 am in Shopian’s Sedow area, leaving three soldiers of the 15 Garhwal regiment injured. The injured identified as Ajab Singh, Parveen Singh and Pawan Rawat are being treated by Srinagar’s 92-Base Army Hospital.

The spokesman said that, based on specific intelligence, the local Army unit launched a cordon-and-search-operation at about 3 am in the general area Patitohalan. “While moving to the target area, approximately a kilometre from Sedow, an explosion took place in the civil hired vehicle, being used by the team, resulting in injuries to three Indian Army soldiers. The blast is very likely to be from either an IED or a grenade or a battery malfunctioning in the vehicle,” the spokesman said, adding that the details of the incident are being ascertained. He confirmed that while one injured soldier is critical, the condition of the two others is stable.

The spokesman further said, “The affected area has been cordoned and all likely escape routes have been sealed. Search to nab the terrorists is in progress”.