Three police personnel were suspended on Saturday over a delay in filing an FIR in the case. 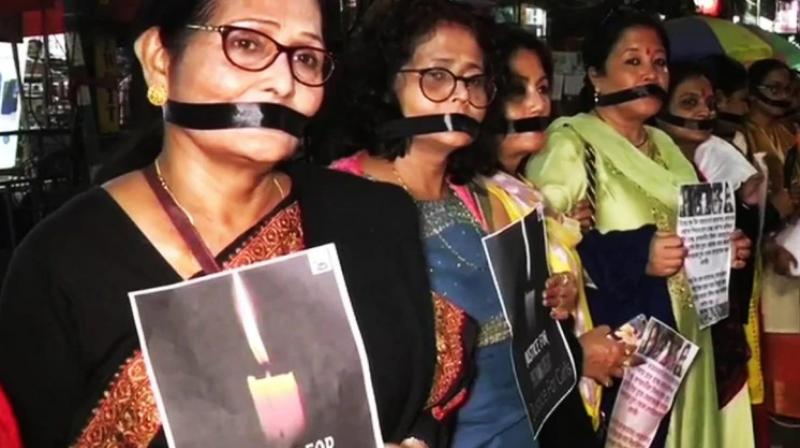 Earlier on Saturday, massive protests were carried out across Telangana and several parts of the country, including the national capital. (Photo: AFP)

Hyderabad: After a massive outpouring of anger across the country over rape and murder of a 26-year-old veterinarian near Hyderabad, Telangana Chief Minister K Chandrashekar Rao on Sunday said her case would be heard in a fast-track court.

Three police personnel were suspended on Saturday over a delay in filing an FIR in the case of the rape and murder of a 26-year-old doctor, whose charred remains were found on the outskirts of Hyderabad.

Cyberabad Police Commissioner V C Sajjanar said the three have been placed under suspension till further orders for dereliction of duty.

"Sub-inspector M Ravi Kumar and head constables P Venu Gopal Reddy and A Sathyanarayana Goud were placed under suspension till further orders based on the findings of a detailed enquiry," said Sajjanar.

He said that a detailed enquiry on the dereliction of duty was carried out on Saturday.

"A detailed enquiry was conducted on the dereliction of duty on delaying the registration of FIR relating to a missing woman of Shamshabad Police Station on the intervening night of Wednesday and Thursday," Sajjanar said.

The accused could not be produced before court following the presence of a restive crowd in front of the Shadnagar police station, demanding that the accused be handed over to them. The police were forced to use mild force to control the crowd.

Earlier on Saturday, massive protests were carried out across Telangana and several parts of the country, including the national capital.

Stones and slippers were hurled at a police vehicle as the accused were being taken to a jail in Hyderabad.

Security forces maintained tight vigil as people staged protests outside the station and shouted slogans against the culprits who raped and killed the 25-year-old veterinarian before burning her body two days ago.

Police said the protests broke out in the morning and continued till the evening. The crowd later dispersed. Some of the protesters demanded death penalty for the accused.

In New Delhi, a woman in her mid-20s sat on a pavement near the Parliament on Saturday morning protesting over the rising incidents of crimes against women. The girl, identified as Anu Dubey, was initially detained and then released from the police station after some officers heard her grievances.

The 26-year-old veteran was raped and killed allegedly by four men, all lorry workers. The four accused were sent to judicial custody for 14 days on Saturday.

A lot of time was wasted because the police were fighting over jurisdiction that in which police station the case should be registered, National Commission for Women Rekha Sharma claimed. She also slammed Telangana Home Minister Mohammed Mahmood Ali's remarks on the victim, saying such people do not deserve the position and they need to be sensitised.