‘This attack wasn't an attack on me, it is an attack on the uniform. There should be action against them,’ Forest Officer C Anitha said. 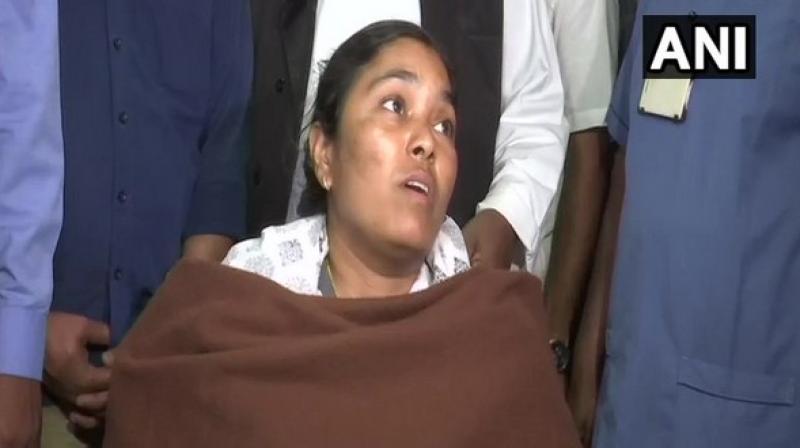 Two police officers were suspended and 14 people were arrested for allegedly attacking a team of forest officials in Sirpur-Kagaznagar area of Asifabad here on Sunday in which Anitha sustained injuries. (Photo: ANI)

Hyderabad: A day after being attacked by the ruling Telangana Rashtra Samiti (TRS) including the brother of an MLA, Forest Officer C Anitha on Monday demanded action against the accused saying that this attack is on the uniform.

The forest officials were allegedly attacked by TRS supporters led by Zilla Parishad Vice Chairman Konaru Krishna when they went to plant saplings at a plot allotted for forest development.

Two police officers were suspended and 14 people were arrested for allegedly attacking a team of forest officials in Sirpur-Kagaznagar area of Asifabad here on Sunday in which Anitha sustained injuries.

"Fourteen have been arrested and two police officers have been suspended for their inaction in the incident of an attack on forest officials," police said.

Earlier, Giving details of the incident, Inspector General of Police Nagi Reddy said: "A gang of around 30 people led by Krishna attacked forest officials who had gone to Sarasala village in Khagaznagar to plant saplings on land allotted for forest development near Kaleshwaram project."

Krishna had said, "The forest department is terrorising Adivasi farmers and confiscating their land forcefully. I was there to resolve the issue and to ensure justice for tribals as forest officials were destroying their crops in the name of afforestation. I tried to pacify department authorities but in vain. The attack was accidental, not intentional."