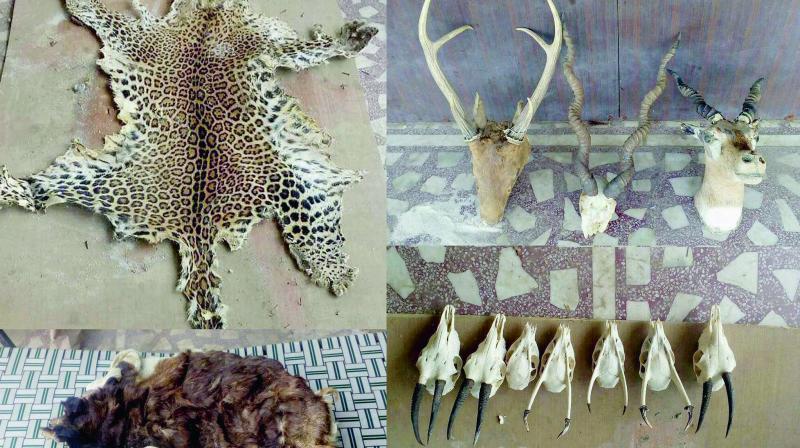 Animal skins and skulls, ivory and 40 guns were recovered from Colonel (Retd) Devendra Singh Bishnoi’s house after a raid in Meerut. (Photo: PTI)

Lucknow: Four people were detained after a major racket involving poaching of animals and trade of their body parts came to light in Meerut district.

The coordinated raids were carried out by Directorate of Revenue Intelligence (DRI), Wild Life department and the local police at the residence of Devendra Singh, a retired Army official.

The main accused in the case is Prashant Bishnoi, who is absconding. He is a national level skeet shooter and the son of the Army official.

Devendra said he had no knowledge of his son’s activities and would not defend him. The National Rifle Association of India (NRAI) had designated Prashant Bishnoi as a ‘renowned’ shooter and gave him licence to own two weapons of 12 bore each. In November 2016, he participated in 60th national championship and stood 65th.

According to police reports, the matter came to light when a raid was carried out at the house of the retired Army Colonel, who also owns a college in Bareilly.

The cops had received a tip-off form an informer. Mr Bishnoi was part of a ‘hunting team’ that was sent to Bihar. In a highly controversial move, the Bihar government had allowed hunting of Neelgai or Blue Bull, claiming it was destroying crops of farmers.

A foreign national is also said to be involved in the racket. At least 140 weapons, licensed and illegal, locally and foreign made, around 50,000 cartridges, skin and carcass of a leopard, blackbuck and extinct animals, antlers, bones and ivory tusk, 15 stuffed deer, sambhar and blackbuck were seized in raids. Rs 1 crore was also recovered from the residence. A fleet of luxury cars was also found parked at his house.

Around 170kg meat, believed to be of blue bull, was also seized from a freezer. Meat was kept in 45 packets and weighs nearly120 kg. The seized samples are being sent to wild life institute of Dehradun for forensic examination.

The DRI is looking into a big wildlife-poaching racket. It is also investigating the rackets involving illegal sale of guns and illegal hunting by high-profile individuals.