Dinakaran, aide Mallikarjuna sent to judicial custody till May 15

Dinakaran's Chartered Accountant was also called by the crime branch for questioning in the matter. 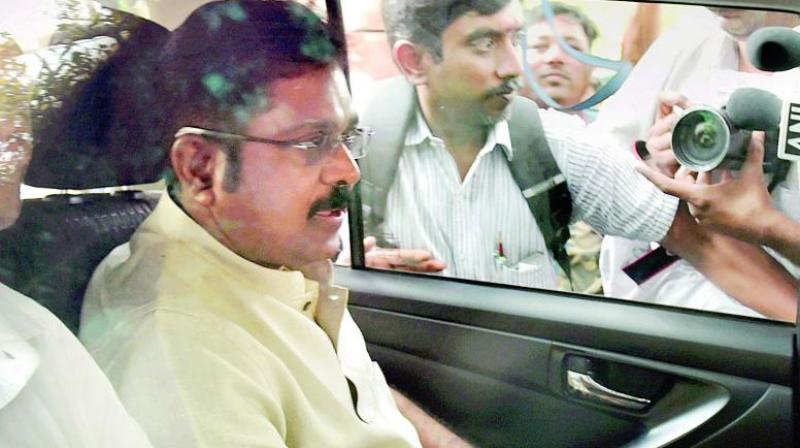 The Delhi Crime Branch recovered Dinakaran's five bank accounts from Chennai through which transactions of huge amount had been carried out. (Photo: PTI)

New Delhi: Ousted AIADMK leader TTV Dinakaran on Monday was sent to judicial custody till May 15. Dinakaran's aide Mallikarjuna has also been sent to the custody.

Earlier yesterday, the Delhi Crime Branch recovered Dinakaran's five bank accounts from Chennai through which transactions of huge amount had been carried out, after which the police sought for further remand of the ousted AIADMK leader.

As per sources, most of the amounts were paid to a Hawala Operator. Dinakaran's Chartered Accountant was also called by the crime branch for questioning in the matter.

The crime branch officials also recovered mobile phone of Sukesh Chandrashekhar from Chennai and also found the details of communication between Sukesh and Dinakaran.

Earlier on Friday, a Delhi Court sent alleged middleman Chandrashekhar to judicial custody till May 12. Dinakaran had reportedly, through Chandrashekhar, sought the 'Two Leaves' symbol of the AIADMK by allegedly trying to bribe an Election Commission official.

The Crime Branch recovered approximately Rs. 1.3 crore and two luxury cars, a BMW and a Mercedes from Chandrashekhar.

Chandrasekhar was picked up from the Hyatt hotel and was produced at the residence of Special Judge Poonam Chaudhry, who allowed the Delhi Police's plea to interrogate the accused for eight days.

During his third day of interrogation by the Crime Branch of the Delhi Police yesterday, Dinakaran finally accepted that he met Chandrashekhar, the man alleged to be the middleman in his bribery dealing with the Election Commission.

Dinakaran initially refused to have known Sukesh. He later accepted meeting him when Sukesh himself gave the details of his meeting with the former. He, however, maintained that he did not pay any money to Sukesh, sources said.