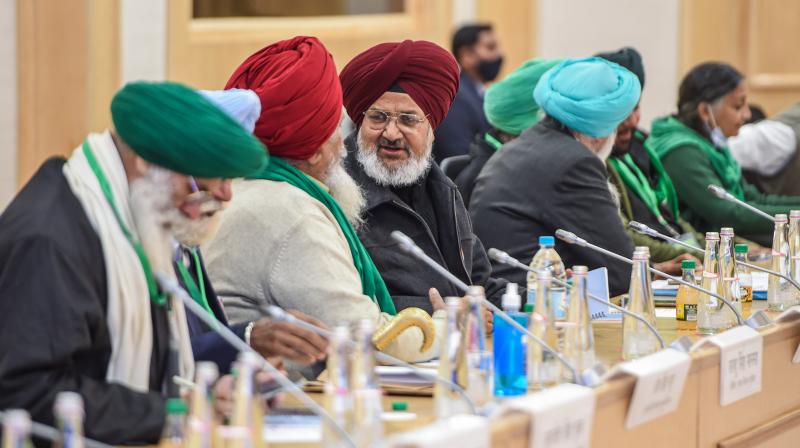 New Delhi: The government and the farmers’ unions reached some common ground on Wednesday to resolve the protesting farmers’ concerns over the rise in power tariffs and penalties for stubble burning, but the two sides remained deadlocked over the main contentious issues of the repeal of three agricultural reform laws and a legal guarantee for Minimum Support Price (MSP). The next round of talks will be held on January 4.

Agriculture minister Narendra Singh Tomar has assured the farmers’ unions that MSP and the mandi system will continue like before. The Centre is also planning to set up a committee to suggest ways on how to bring in a new law on MSP.  On the protesting unions’ demand for repeal of the three laws, the government may set up another committee to look into its constitutional validity and propriety, keeping in mind the welfare of farmers across the country.

After nearly five hours of negotiations in the sixth round between the three Union ministers and a 41-member representative group of the thousands of farmers protesting at Delhi’s borders, Mr Tomar said the talks were held in a good climate and ended on a positive note.

The minister said he had requested the farmers’ leaders to send home the elderly, women and children. He also congratulated the leaders for keeping peace and discipline during their protests at Delhi’s borders.

This was the sixth round of talks after a three-week gap. The farmers have decided to continue with their agitation until all their demands are met, but for the time being have deferred the proposed tractor march so that it doesn’t clash with the next round of talks with the government on January 4. Earlier this week, the farmers announced a tractor march from the Singhu and Tikri borders to the Kundli-Manesar-Palwal (KMP) Highway on December 30. They later deferred it to Thursday.

Mr Tomar said “at least 50 per cent resolution has been reached” with mutual agreement on two of the four items on the agenda -- one relating to the proposed electricity law and the other about an ordinance to keep farmers outside the ambit of the penalty clause (upto Rs 1 crore) for stubble burning.

On the farmers’ demand for a legal guarantee for procurement at MSP, Mr Tomar said the government had already made it clear that it is ready to give a written assurance. “Discussions on the three farm laws and MSP will continue in the next round of talks on January 4,” he told reporters after the meeting ended.

The agriculture minister said the union leaders kept insisting on the repeal of the three farm laws, but the government tried to explain to them the benefits of the laws and asked about the specific problems faced by the farmers.

Ahead of the meeting, Union minister Som Prakash had said the talks would be “decisive” and the government wants farmers to “celebrate the New Year at their homes”.

Hailing the new farm laws, defence minister Rajnath Singh said that the protesting farmers should see their implementation for two years. He said: “My only request to farmers is that clause-wise discussion based on logic should be done and not seek ‘yes’ or ‘no’ answers. We will find a resolution to the problem. The farmers should see the implementation of these laws for two years as an experiment. We will be ready to make the necessary amendments if there is a need.”

While the talks were on at Vigyan Bhavan, the Shiromani Akali Dal and the Congress appealed to the farmers to hold direct talks with Prime Minister Narendra Modi, otherwise the dialogue would not yield any results. Punjab Congress chief Sunil Jakhar said the involvement of Mr Modi or home minister Amit Shah was a must for a successful dialogue.