The series of eye-catching posts is part of the Delhi Police’s #RoadSafetyHaiZaroori (Road safety is important) initiative. 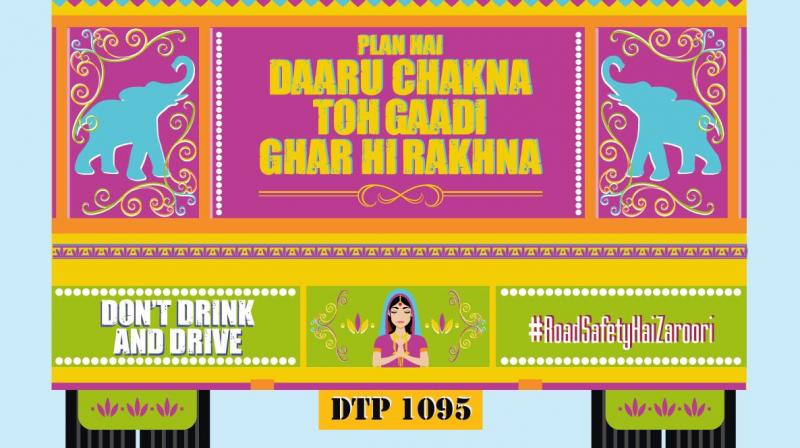 Each of the images posted on Twitter carries the helpline number for Delhi Traffic Police: 1095; the use of bright colours and Desi art form catches the attention of readers instantly. (Photo: Twitter | @DelhiPolice)

New Delhi: Social media butterflies and twitterati are busy pondering what the Delhi Police has been smoking of late. The Delhi Police is in a bid to steal the show on Twitter with its awareness campaign on road safety over the past few days.

Just one day after Christmas, on December 26, the Delhi Police posted a striking, colourful picture of the rear of a truck on its official Twitter handle. The image carried an equally dramatic caption that read, "Mat lagao road pe race, accident mein bigdega face." The caution message translates into, “Don’t race on the roads, an accident might ruin your face.”

Your few moments of adrenaline can leave you sorry for the rest of the life!
Don't drive rash or over speed. #RoadSafety pic.twitter.com/HqiJEcvFeH

On the next day their Twitter page carried an image discouraging drunk driving. “Daaru pe hai bhaari, toh lo cab ki sawaari” (If drunk, take a cab instead of driving back home); such were the theatrics of the accompanying catchphrase.

The Delhi Police struck again on the penultimate day of the year with the ‘back of its truck image’ reading “Thodi si wine bhi nahi hai fine” (Not even a drop of wine is fine.)

Each of the images carried the helpline number of Delhi Traffic Police: 1095. The use of bright colours and Desi art form catches the attention of readers instantly.

On New Year’s eve, their official Twitter handle underscored all preceding posts on road safety measures with a video that was originally posted on December 2. In the post, the Delhi Police urged people to not drink and drive. The video comes as a warning of zero tolerance toward any offence resulting from irresponsible revelry.

@DelhiPolice and @dtptraffic urges everyone to Not Drink and Drive.#YaDrinkYaDrive.
There will be ZERO tolerance towards this offence as it endangers both driver and road users. pic.twitter.com/iu2GSJnQAm

The series of eye-catching posts is part of the Delhi Police’s #RoadSafetyHaiZaroori (Road safety is important) initiative.

The campaign on social media keeps in sync with festive preparations and carousing, that render road safety as a serious threat. It is usually around this time of the year that security forces tighten rules and conduct strict checking to curb accidents.