Withdrawal limit from ATM hiked to Rs 4,500 per day from Jan 1

However, there has been no change in the weekly withdrawal limit, which stands at Rs 24,000. 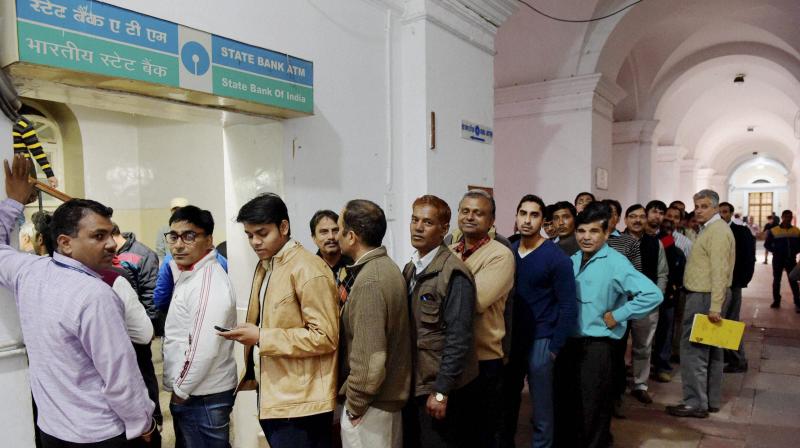 Employees of Finance Ministry stand in a long queue to withdraw cash from an ATM at North Block in New Delhi. (Photo: PTI)

Mumbai: In a relief to common man, the Reserve Bank of India on Friday said cash withdrawal limit from ATMs will be increased to Rs 4,500 per day from the current Rs 2,500 from January 1.

However, there has been no change in the weekly withdrawal limit, which stands at Rs 24,000, including from ATM, for individuals (Rs 50,000 in case of small traders).

"On a review of the position, the daily limit of withdrawal from ATMs has been increased (within the overall weekly limits specified) with effect from January 1, 2017, from the existing Rs 2,500 to Rs 4,500 per day per card," the central bank said in a notification.

Following demonetisation of old Rs 500/1000 notes on November 9, limits had been imposed on withdrawal of cash from banks as well as ATMs.

The Reserve Bank's notification further stated "there is no change in weekly withdrawal limits" and such disbursals "should predominantly be in the denomination of Rs 500".

Earlier in the day, the RBI had permitted White Label ATM Operators (WLAOs) to source cash from retail outlets.

Most of the White Label ATMs are running dry since demonetisation as the operators were facing difficulties in sourcing cash from their sponsor bank(s).

Today was the last day to deposit the invalid currency notes in banks. However, people still have time to exchange the currency notes at designated RBI counters till March 31 after giving valid reasons for not depositing defunct notes in their accounts by December 30.