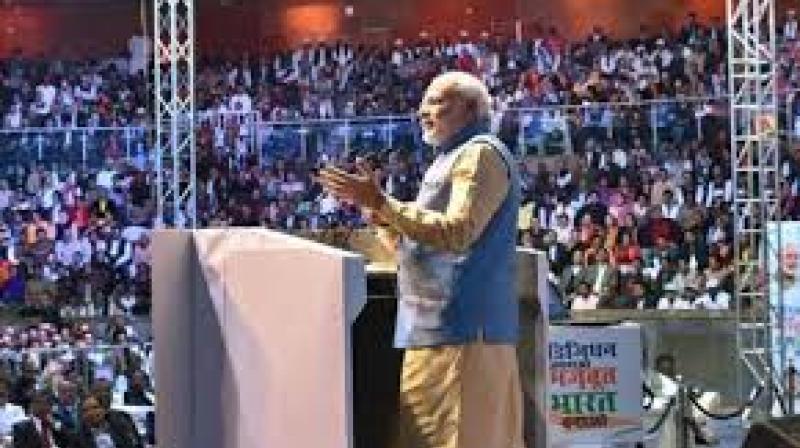 Prime Minister Narendra Modi addressing at the launch of a new mobile app 'BHIM' to encourage e-transactions during the ''Digital Mela'' at Talkatora Stadium in New Delhi. (Photo: PTI)

Named after the architect of the Indian Constitution, Babasaheb Bhim Rao Ambedkar, the Bharat Interface for Money (BHIM) is a simplified payment platform designed to make Unified Payment Interface (UPI) and USSD payment modes simpler and usable across feature phones and smart phones.

"The day is not far, when people will conduct their business through this app...It is a simple app and you can download it on your smartphones or feature phones. You don't even require internet connection for this," Modi said in his address at 'DigiDhan Mela' here.

The government had announced scrapping of old Rs 500 and 1,000 notes on November 8. While this led to a cash crunch and serpentine queues at banks and ATMs, the decision also pushed uptake of digital payments in the country.

The app, which can be downloaded from Google Playstore, is currently available in Hindi and English, and support for more languages is expected soon.

BHIM is interoperable with other Unified Payment Interface (UPI) applications and bank accounts.

"We all want our country to develop, become economically stronger and a resurgent nation. Through Digital India initiative, the country has take a giant leap towards that direction," IT Minister Ravi Shankar Prasad said.

Users can register their bank account with BHIM, and set a UPI PIN for the account. The mobile number then acts as the user's identifier, enabling transactions like sending or receiving money.

NITI Aayog CEO Amitabh Kant said, "It is only a matter of time before the entire country goes digital."

"Going forward, we hope that provisions would be made for adding e-wallets on UPI enabling people to pay through bank accounts or e-wallets using the BHIM app," Singh added.

Trupay Co-Founder Rahul Gochhwal said, "UPI is the most advanced payment system in the world. This will develop the overall payments ecosystem in the country."