After consultation with central party leadership, BJP state president Tapir Gao inducted the chief minister and 32 MLAs in the party. 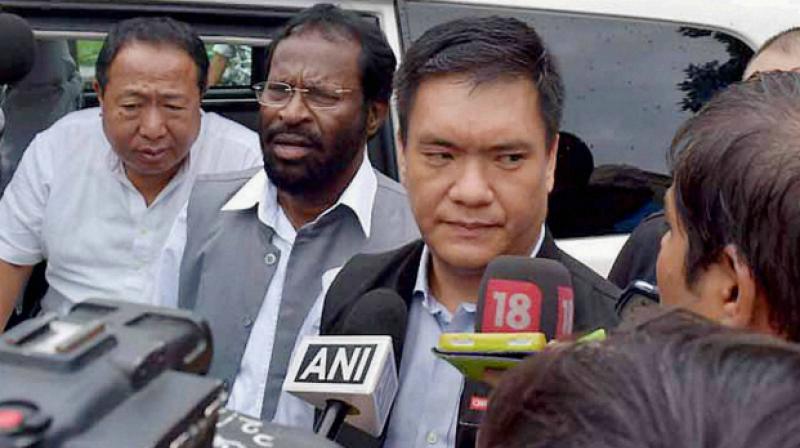 Guwahati: Just a day after Arunachal Pradesh Chief Minister Pema Khandu was suspended from People's Party of Arunachal, he along with 32 MLAs joined the BJP, which on Saturday formed government in the state with their support.

The 33 MLAs joined the BJP after a meeting at Itanagar on Saturday. After consultation with central party leadership, BJP state president Tapir Gao inducted the chief minister and 32 MLAs in the party.

Khandu also paraded the MLAs before the Assembly Speaker Tenzing Norbu Thongdok who accepted their joining. The PPA is now left with only 10 MLAs.

The political drama in the frontier state had started on Thursday when the PPA president Kahfa Bengia temporarily suspended Khandu, his deputy Chowna Mein and five legislators from the primary membership of the party for alleged anti-party activities.

The PPA, member of the North East Democratic Alliance (NEDA) led by BJP, went on announcing Takam Pario as the new chief minister of the state on Friday.

However, the political equation started changing when majority of the PPA MLAs deserted the party and later shifted their allegiance to Khandu.

Soon after announcing the decision of joining the BJP at Itanagar, Khandu told reporters, “Lotus has finally bloomed in Arunachal. The people of the state will see a new dawn of development in the new year under the new government.”

The chief minister said that circumstances compelled the MLAs to take this decision in the interest of the people and the state.

He said, “After several years of Congress misrule we observed that there was no visible development in the state. We joined the PPA with the intention to take the state to progress and prosperity, but there too, we find similar condition where the party president treated the MLAs undemocratically.”

“So with focus on development, our MLAs unanimously decided to join the BJP for overall progress of the state,” the chief minister said.

Admitting that political instability in the state has slowed down the development,  Khandu said, “Now with NDA government at the Centre, the state will witness a sea change in the coming years. Until and unless there is stability in the government, no development can take place. There will be no more dissident politics and we shall now focus on development only.”

Khandu said, “The decision to join the BJP is a blessing in disguise for the people and the state.”

Terming the decision of the PPA president to suspend the MLAs as "undemocratic" Khandu said that before such a move the party leadership should have issued at least a show cause notice to the MLAs.