India   All India  31 Dec 2016  Lift limits on cash withdrawals: Rahul put forth demands to Modi before his address
India, All India

Lift limits on cash withdrawals: Rahul put forth demands to Modi before his address

He also demanded the prime minister to deposit Rs 25,000 in the account of one woman in each Below Poverty Line family. 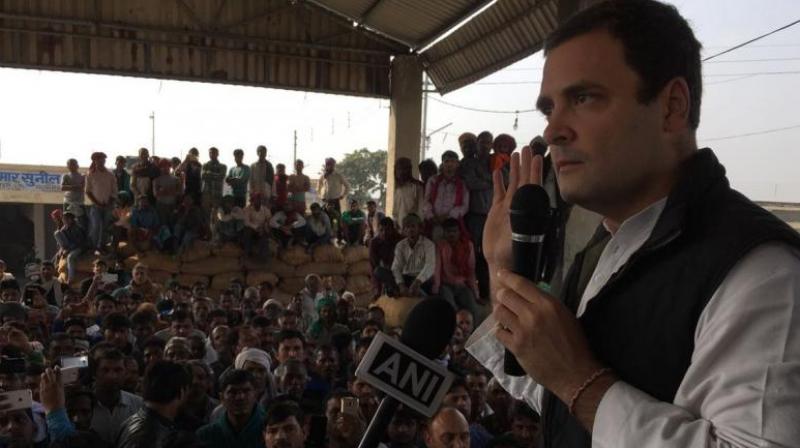 New Delhi: Congress Vice-President Rahul Gandhi on Saturday put forth a charter of demands to Prime Minister Narendra Modi, asking him to lift the restrictions on cash withdrawals immediately and pay Rs 25,000 to every BPL family.

Gandhi took to Twitter to highlight his demands ahead of Modi's second television address to the nation tonight after his surprise November 8 announcement to withdraw Rs 1,000 and old Rs 500 currency notes.

The Congress vice president, a staunch critic of the government's decision to demonetise the notes, listed out his eight demands to Modi as the 50 days the prime minister had sought to normalise the situation expired yesterday and there still seem to have some issues with the availability of notes.

He has dubbed the move the single most arbitrary decision in the history of the world affecting 1.3 billion people.

Besides asking Modi to "lift restrictions on withdrawal of money with immediate effect", Gandhi demanded the prime minister to deposit Rs 25,000 in the account of one woman in each Below Poverty Line (BPL) family.

He advocated immediately abolishing charges on digital transactions and called for Income and Sales taxes rebate of 50 per cent to small-scale shopkeepers and businesses.

Gandhi demanded the prime minister to compensate all bank account holders with special interest rate at 18 per cent per annum for the "time restrictions are in place".

He also urged doubling of number of guaranteed workdays and wage rate under Mahatma Gandhi National Rural Employment Guarantee Act (MGNREGA) for a year and a special one-time bonus of 20 per cent over and above the Minimum Support Price (MSP) of all rabi crops.

Another of his demands was that rate of ration under public distribution system (PDS) be halved for a year under the provision of Food Security Act.

In one of his tweets, Gandhi said, "Destroyed in the last 50 days: trust in the Prime Minister's word. Weekly cash withdrawal limits must go".