Some MPs said that while they thought Modi's decision was good, its execution had been botched. 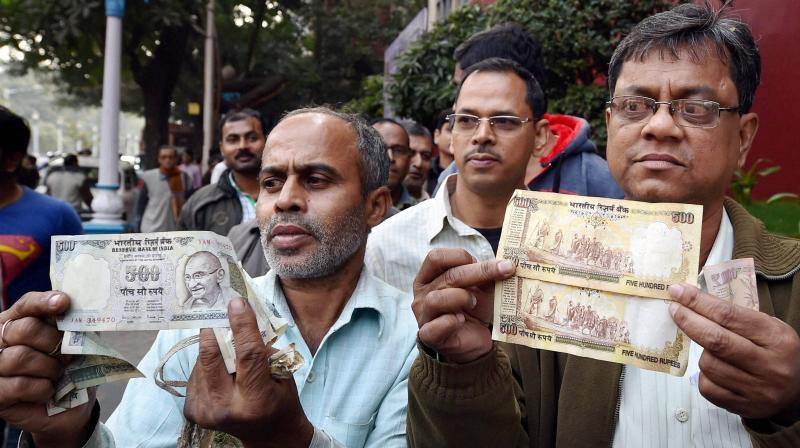 Disappointed people shows their old currency notes which they could not exchange at the RBI office closed for the day in Kolkata. (Photo: PTI)

New Delhi: Cash shortages weeks after Prime Minister Narendra Modi's decision to abolish large currency notes are making allies and members of his ruling party anxious, with some distancing themselves from the move ahead of a series of state elections.

Modi removed Rs 500 and 1,000 notes on November 8, billing it as an attempt to root out corruption, end terror financing and move the country into the age of digital payments.

He promised to replace all old bills with enough new currency notes by the end of this month. But his government has struggled to do that, leading to long lines at banks and a slump in economy activity. Nearly 90 percent of transactions in India used to be in cash.

Interviews with six lawmakers from Bharatiya Janata Party (BJP) and a senior leader of Rashtriya Swayamsevak Sangh (RSS), show his party cadre is starting to worry that the cash crunch could hurt their prospects in several states that go to the polls next year.

Some parliamentarians said that while they thought Modi's decision was good, its execution had been botched and they were faced with constituents who were increasingly upset.

"There is no doubt that it is difficult to convince voters that everything will be fine," said Santosh Gangwar, junior finance minister who is leading the BJP campaign in Uttar Pradesh.

"Every candidate who will be contesting polls is nervous because they feel people may not vote for the BJP ... There is tension and we cannot deny it," he said.

Of the BJP's 71 MPs from Uttar Pradesh, 28 have been to BJP President Amit Shah and the finance minister's office to seek solutions for the cash crunch, said a senior finance ministry official.

BJP spokesman G.V.L. Narasimha Rao said that despite temporary difficulties, the prime minister continued to enjoy overwhelming support. "Party cadres are highly enthused about a big victory in upcoming elections, and if a few are apprehensive, they will realise the reality soon," Rao said.

Disquiet within the BJP underscores how Modi's unprecedented bet is turning into a test of popularity, and could go some way to determining his political future.

It has become a central issue in Uttar Pradesh, where the outcome of elections early next year will be key for Modi's expected bid for a second term in 2019.

The opposition, led by the Congress, has joined forces, mocking the government for being ill-prepared for so-called "demonetisation" and blaming it for hardships faced by the poor as a result. It has called for Modi's resignation.

The senior RSS official said they had counselled Modi days before the move to take time to prepare the ground for such a massive exercise, including setting up two new mints and expanding the banking network, and to roll it out in phases.

But the Prime Minister decided to press ahead, and he alone would bear responsibility for its failure or success, the official added.

Modi and senior members of his cabinet defend demonetisation. In an interview, Modi said it would give the economy a boost and provide long-term benefits, including forcing the country's vast shadow economy into the open.

Modi's announcement enjoyed popular support at first, with many people prepared to endure hardship as long as others were forced to give up ill-gotten wealth or pay tax. But shortages of new 500 and 2,000 rupee notes have caused tempers to rise as millions queue at banks and ATMs to draw money.

Last week, more than three dozen BJP lawmakers, many of whom came from states that go to polls next year, met with Shah to demand that the government sends more cash to their constituencies, and quickly.

The MPs told Shah about severe cash shortages and hardship to local businesses and ordinary people, according to several lawmakers who attended the meeting.

They told the BJP president that they did not have the courage to hold election rallies at a time when people still had to stand in line, sometimes for hours, to get money. Some said they had not started door-to-door campaigning.

"The situation is grim, and we cannot ignore it," Jagdambika Pal, a BJP lawmaker from Uttar Pradesh who attended the meeting, said. "It is a challenge for every BJP lawmaker to manage the situation, but we cannot do anything if there is no money in the banks."