Akhilesh was on Friday expelled from SP by his father after he announced a parallel list of candidates a day before. 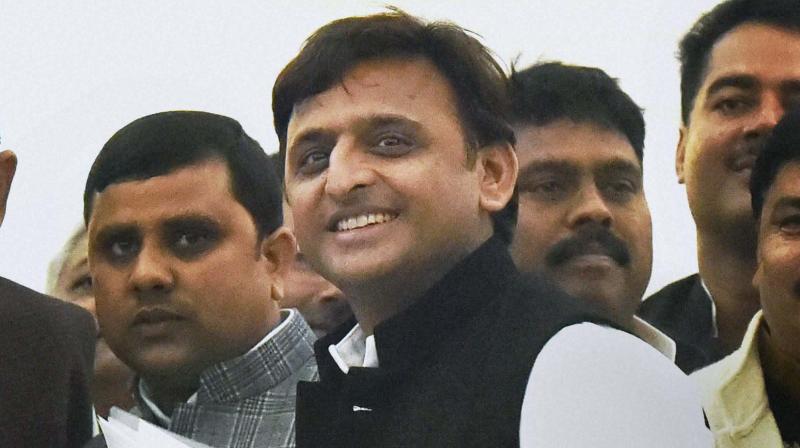 Lucknow: Amid the political war between the father and son in Uttar Pradesh, majority of the Samajwadi Party MLAs on Saturday chose Chief Minister Akhilesh Yadav over his father and party supremo Mulayam Singh Yadav.

More than 200 of the 229 MLAs of Uttar Pradesh’s ruling party have backed Akhilesh, PTI quoted its sources as saying. Akhilesh was on Friday expelled from Samajwadi Party by his father after he announced a parallel list of candidates a day before.

Akhilesh held a meeting with at least 229 SP MLAs at his residence. However, he left the meeting midway to meet Mulayam Singh.

According to reports, state SP chief Shivpal Yadav also joined the meeting with Mulayam, kindling a ray of hope for a last minute patch-up between father and son.

The chief minister's 5-Kalidas Marg residence appeared to be the hub of high drama with youth supporters of Akhilesh assembling in large numbers to vent their fury over his expulsion and that of his uncle Ramgopal Yadav.

Political activities heated up right from the morning with a series of meetings planned during the day, when Mulayam will meet party candidates announced by him and state SP chief Shivpal Yadav, the warring uncle of Akhilesh.

Meanwhile, Samajwadi Party leader Amar Singh today termed the crisis in the party as "unfortunate" and asked party members to support Mulayam in the family feud.

"I appeal to the party members to stand with Netaji (Mulayam). Whatever is happening is very unfortunate," Amar, who had recently made a comeback to the party after a long exile, said.

Mulayam had yesterday expelled his son Akhilesh and Ramgopal from SP for six years after they put up candidates against the official nominees and summoned a party meet tomorrow, pushing the ruling party to the precipice of a split just ahead of the UP Assembly elections likely to be announced any day now.

Mulayam had said he took the action against Akhilesh and Ramgopal to save the party which he had built through hard efforts.

"We have to save the party. The party comes first. That is why we are expelling both Akhilesh and Ramgopal," he said.

He explained that the decision was taken after Ramgopal, in his capacity as general secretary, called an emergency meeting of the party on January 1 and Akhilesh "supported" it.