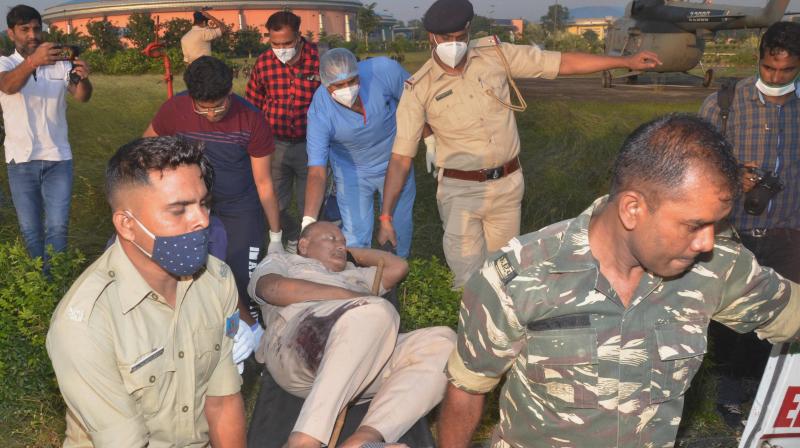 An injured jawan of Central Reserve Police Force (CRPF) being taken for treatment after an IED blast triggered allegedly by CPI-Maoist in Lohardaga district, in Ranchi, Friday, Oct. 30, 2020. (PTI)

The incident took place at Kohakameta under Kachapal police limits in the district, Bastar police said.

“The injured jawan has been admitted to the local district hospital. His condition is stated to be stable”, Bastar range inspector general of police P Sunderraj told this newspaper.

In another incident, 3 Naxals were arrested by a search party comprising district reserve group personnel in the bank of river Mingachal in Chhattisgarh’s south Bastar district of Bijapur.

The three arrested Maoists have been identified as Santu Sori, Ramlu Kuharami and Kumari Laxmi Podiyam.

The three Maoists have confessed to their involvement in the abduction and killing of assistant sub-inspector of police Nagaiya Korsa in Bijapur district a couple of months ago, police said.

The slain cop was on his way from Kutru in Bijapur district to his village in south Bastar district of Dantewada on August 31 when he was abducted by the Maoists at Mangapeta, nearly 25 km from district headquarters of Bijapur.

His body was found the next day.

Maoists had owned responsibility for killing the cop.