'Preventive vigilance is better that the punitive vigilance' can prove to be effective policy in checking corruption, the President said. 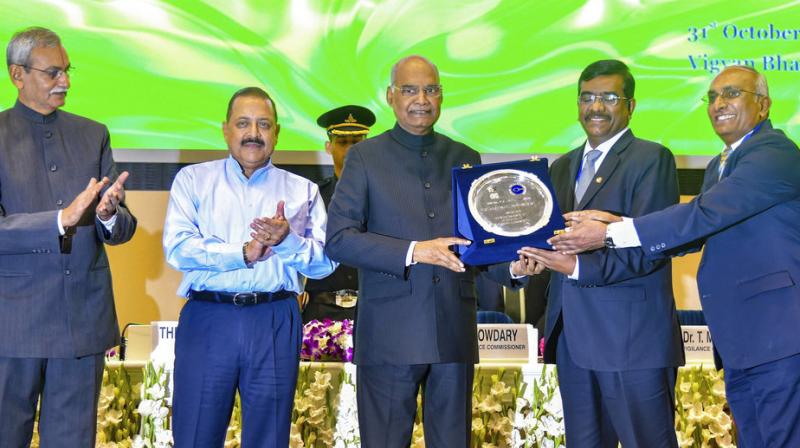 New Delhi: President Ram Nath Kovind on Wednesday asked those holding top posts in financial institutions such as banks and insurance companies, and the government to act like "ethical leaders" as their work and conduct affects the lives of common people.

His advice assumes significance as CBI Director Alok Verma and Special Director Rakesh Asthana, who have accused each other of impropriety, have been sent on leave by the central government.

At a function organised by probity-watchdog Central Vigilance Commission, the President said there is a serious effort to curb and punish those involved in economic offences, and to give habitual offenders a sense of fear of the law.

Citing different legislative measures and the introduction of the Fugitive Economic Offenders Bill in Parliament, President Kovind said such initiatives give confidence to honest citizens and taxpayers.

Addressing the gathering, he said those present in the auditorium hold top positions in state-run banks, insurance companies and other financial institutions, and the government.

"It is important that you understand the actual meaning of integrity, transparency and honesty. In the broad meaning of integrity both dedication to work and institutional discipline is included. Your conduct , inspires other people of your organisation. Your work and ethical values, effects lives of lakhs and crores of citizens. In true sense, your role is of ethical leaders," the President said.

The function was organised by the CVC during the ongoing Vigilance Awareness Week, being observed from October 29 to November 3 to raise awareness on anti-corruption measures.

"The confidence of our people that decisions and actions are being undertaken with transparency, accountability and fairness must continuously be enhanced. Unnecessary delays in decision making too hurt the credibility of any institution," he said, adding that technology and the internet can be of great use in this regard.

Talking about benefits of use of technology to check graft, he said Rs 3.65 lakh crore has been delivered to beneficiaries of 431 different schemes using direct benefit transfers in the past four years.

"In addition, I have been told that direct benefit transfer and other governance reforms have led to removal of duplicate or fake beneficiaries, as also to plugging of leakages. As a result of these, estimated savings amounting to approximately Rs 90,000 crore have been made in the period ending March 2018," President Kovind said.

He said from extending banking facilities to previously un-banked sections of our people to implementing the Goods and Services Tax, various endeavours have been made to boost the formal economy.

"Adoption of digital systems has also helped contain corruption. In this manner, loop-holes for corruption and misuse of public money are being addressed," the President said.