One top Government source said Birju had told authorities he was also thinking about plans to start an airline. 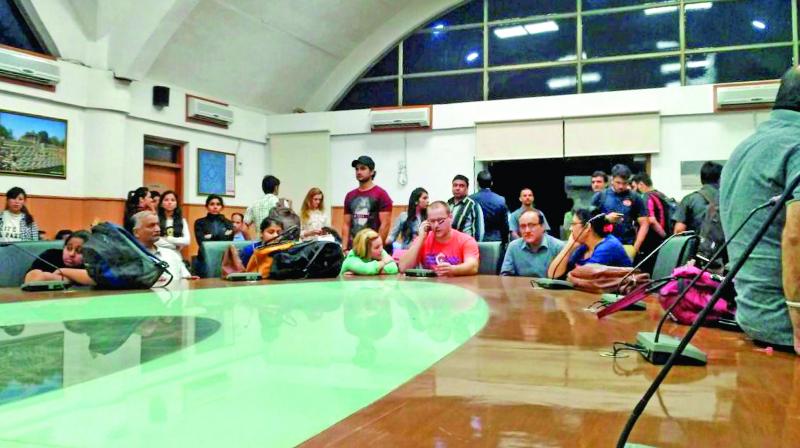 Mumbai/Ahmedabad/New Delhi: A Gujarati jeweller based in Mumbai travelling as a business class passenger on a Jet Airways flight was arrested on Monday at Ahmedabad for allegedly leaving a hijack and bomb threat note inside the washroom of the Mumbai–Delhi flight, which said the aircraft had been hijacked, warning it against landing at New Delhi and asked it to be flown instead to Pakistan-Occupied Kashmir (PoK).

The man, identified as Salla Birju, is set to become the first person to be put on the national “No-Fly” list of the Government for endangering air-safety. Union Civil Aviation Minister Ashok Gajapathi Raju said he was “advising” airlines to put the man on the no-fly list. The NIA may also take over the probe. The note written by the man warned that bombs would explode in the cargo area if the plane tried to land at Delhi. The discovery of the note written in both English and Urdu by an air hostess led to the aircraft being diverted to Ahmedabad’s Sardar Vallabhai Patel International Airport early on Monday. The threat was later declared a hoax. Birju was identified during investigations since he was apparently the person who had used the specific washroom last  on the flight. Top sources told this newspaper that Birju had confessed during interrogation and had told investigating authorities that he was a businessman who wanted to harm Jet Airways. Birju, who is reportedly in his late 30s and belongs to Gujarat’s Amreli district, was allegedly a repeat offender who had carried a cockroach on a Jet Airways flight on an earlier occasion and claimed that it was in the meal served to him on the flight. According to news agency PTI, the airline had let him go at that time after taking an assurance that he would not repeat the offence.

There are a few theories doing the rounds on his objectives this time. There was no official confirmation on some media reports that claimed that Birju was wooing a lady working in the airline and wanted to harm the airline so she could approach him for employment. Speculation was also rife that he may be related to a lady-employee in the airline. One top Government source said Birju had told authorities he was also thinking about plans to start an airline.

The airhostess found the note at around 3.30 am during the flight , around 35 minutes after the flight took off from Mumbai at 2.55 am, and promptly informed the pilot. The air-hostess was sneezing and apparently went into the toilet looking for tissue paper when she found the note.

Meanwhile, Civil Aviation Minister Ashok Gajapathi Raju tweeted, “I am informed that the person responsible for Jet flt 339 (Mum-Del) incident causing the landing at Ahmedabad today morn. has been identified. I am advising the Airlines to put him on the No-Fly list immediately, in addition to other statutory criminal action.”

In a statement, Jet Airways said, “Jet Airways flight 9W 339 of October 30, 2017, a Boeing 737-900 from Mumbai to Delhi, was diverted to Ahmedabad following declaration of an emergency as per established security procedures, due to the detection of an onboard security threat.”