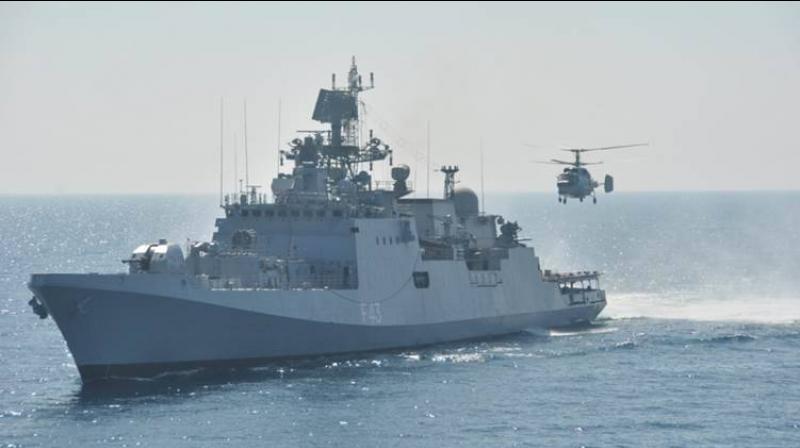 Indian Navy has reportedly deployed one of its frontline warships in the South China Sea. (Representative Image)

New Delhi: The Indian Navy has reportedly deployed one of its frontline warships in the South China Sea, much to the displeasure of the Chinese, who raised objections during diplomatic talks between the two nations. The warship was reportedly deployed in the South China Sea after the June 15 clash with Chinese PLA troops in the Galwan Valley, where 20 Indian soldiers were killed.

China objected to the Indian Navy’s presence in the South China Sea, where the PLA Navy is trying to consolidate its position. The US Navy is also conducting exercises there to challenge the PLA Navy’s dominance.

US aircraft carriers USS Ronald Reagan and USS Nimitz, along with escorting cruisers and destroyers, held exercises in the South China Sea to challenge Chinese hegemony in the region.

According to reports, the Indian warship was continuously maintaining contact with the US Navy deployed there over secure communications systems. As part of routine drills, the Indian warship is constantly updated about the status of the movement of military vessels of other countries there. The entire mission was carried out in a very hush-hush manner to avoid any public glare on the Navy’s activities.

The Indian Navy also deployed its frontline vessels along the Malacca Straits near the Andaman and Nicobar Islands and the route from where the Chinese Navy enters the Indian Ocean Region to keep a check on any Chinese naval activity. It is a crucial sea trade route for China. The Navy also held exercises in the Andamans and has deployed MiG-29K fighters in the islands.

Last month Indian Navy warships and a US Navy carrier group held a “passage exercise” in the Indian Ocean Region.