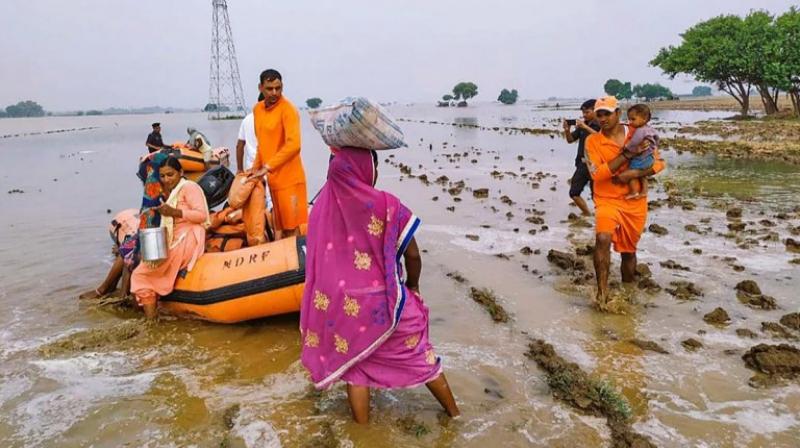 As many as 411 villages in 12 districts in Madhya Pradesh have been affected by floods. (PTI Photo)

Bhopal: Nearly 5 lakh people in 411 villages under 12 districts in Madhya Pradesh have been affected by flash floods in various rivers in the state caused by torrential rains in the last 72 hours.

At least seven persons were killed in rain-related incidents in the state in the last 24 hours.

Four children were killed when a mud wall of a house collapsed on them while they were playing on a road in Banhara village under Umariapan police limits in Katni district on Saturday evening.

Similarly, two girls, aged nine and 14, drowned in an undated field while grazing goats in Pareihi village in Chhatarpur district on Saturday evening.

A girl, aged 13, was killed when the walls of her house collapsed in Sehore on Sunday.

“As many as 411 villages in 12 districts in the state have been affected by floods. Around 8000 people have been rescued by Indian Air Force choppers so far. Army and State Disaster Response Force (SDRF) have been deployed in rescue and relief operations in flood-affected areas”, chief minister Shivraj Singh Chouhan who conducted aerial survey of the flood-hit areas in the state for the second day on Sunday said.

Chouhan briefed prime minister Narendra Modi on the flood situation in the state.

Reports reaching from various parts of the state said the torrential rains have caused damage to properties and standing crops in many flood-hit areas in the state.