'Nowhere man': What lies ahead for those left out of final NRC list

Now that the final NRC list is out, the dropouts who have been excluded are in for an elaborate process. 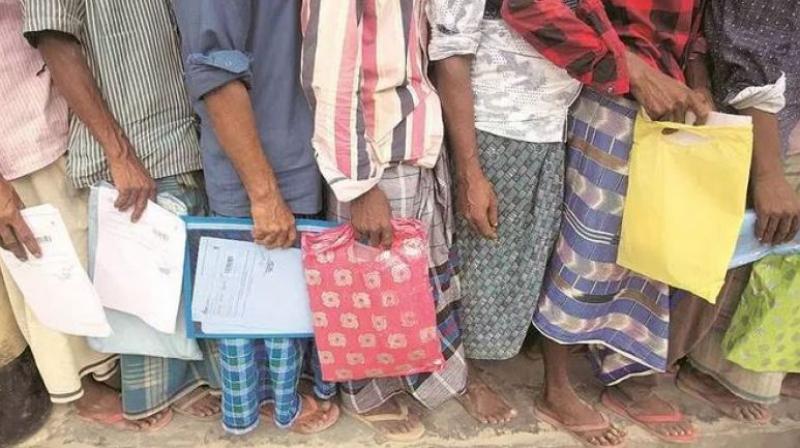 The excluded people will have to present their certified documents to be submitted for an appeal before the Foreigners' Tribunal. The Centre has set up 1000 foreign Tribunal in addition of which 200 more will be given access. (Photo: AP)

Mumbai: The Assam government has declared that those left out of final NRC list would neither be labelled as foreigners nor will they be arrested till the matter is taken to court but they will have to go via the Foreigners' Tribunal path to prove their citizenship, News18 reported.

These people maybe in for a long legal fight which may cost them lakhs of rupees, Citizens for Justice and Peace (CJP), an NGO which provides legal assistance to those left out of the draft NRC quoted.

Apart from CJP, various organisations like Association for protection of civil rights (APCR), Assam Chapter, a group of indigenous Muslim lawyers from Assam have offered free legal assistance to genuine citizens who may have been ousted.

Ruling party BJP and Opposition Congress have also offered their assistance in order to avoid chaos and to reduce the anticipated financial burden claimants.

Read: Over 19 lakh excluded from final National Register of Citizens in Assam

The State government has also provided amenities like free legal services for NRC dropouts with income below 3 lakhs. The expenses would be born by District Legal Services Authorities. (DLSA)

Following people fall under the bracket of people who can avail free legal services: a member of a Scheduled Caste or Scheduled Tribe, a victim of human trafficking, a beggar (as referred to in Article 23 of the Constitution), a woman or a child, a disabled person, a victim of a mass disaster or ethnic violence, of caste atrocity or natural calamities like flood, drought, earthquake or industrial disaster, an industrial workman and people in custody.

Earlier, a person declared a foreigner by a tribunal in the state used to be detained in one of the six detention centres set up inside central and district jails but as per the recent Supreme Court (SC) order, those who have been in detention for three years or more can be released on bail on sureties signed by two Indian citizens.

Now that the final NRC list is out, the dropouts who have been excluded are in for an elaborate process.

The excluded people will have to present their certified documents to be submitted for an appeal before the Foreigners' Tribunal. The Centre has set up 1000 foreign Tribunal in addition of which 200 more will be given access.

The list, second since 1951, is an exercise to identify legal citizens of India and weed out illegal immigrants from Assam.