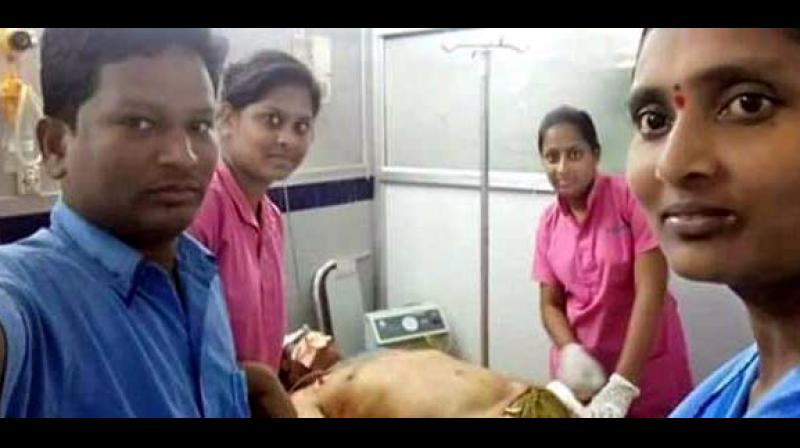 A ward boy is seen taking a selfie from his mobile phone with the actor-politician's body in the backdrop. A ward girl and two nurses are also looking into the camera. (Screengrab | Twitter)

Hyderabad: Four employees at the Kamineni Hospital in Hyderabad clicked selfies with the body of actor-turned-politician and son of the founder of Telugu Desam Party (TDP) NTR's, Nandamuri Harikrishna after he died in a road accident on Wednesday.

The picture clicked by the employees of the hospital in Telangana's Nalgonda district went viral over social media on Friday and drew all-round condemnation.

A ward boy is seen taking a selfie from his mobile phone with the actor-politician's body in the backdrop. A ward girl and two nurses are also looking into the camera.

According to reports, the picture was apparently taken minutes after the efforts of the doctors to resuscitate Harikrishna failed.

Reacting to the outrage caused by the selfie, the management of Kamineni hospital assured action against the employees.

Harikrishna, a former Rajya Sabha member and former Andhra Pradesh minister, was on his way to Nellore to attend a wedding when the car he was driving crashed into a road median on Nalgonda Highway.

The 61-year-old actor-turned-politician, Harikrishna was thrown out of the driver’s seat on the road and sustained critical head injuries. He was rushed to Kamineni Hospital.

He started his film career in Telugu films as a child artist in 1960s.

Harikrishna was cremated with state honours in Hyderabad on Thursday.