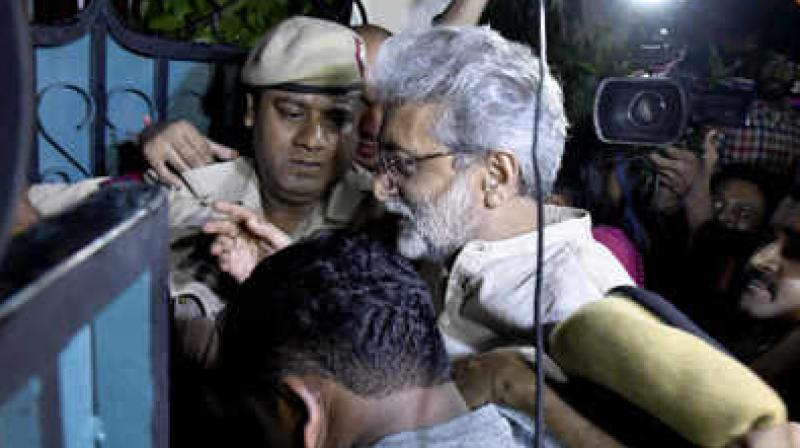 Husain said Gautam Navlakha appears confident and says he is prepared for 'any outcome'. (Photo: PTI)

New Delhi: "We were asked by policemen to keep the door of the bedroom open and sleep. I was livid and I flipped. I asked them to stand up and say sorry," Sabha Husain, female partner of activist Gautam Navlakha, said on Thursday.

She was describing the scene at their residence in Delhi's Nehru Enclave, where Gautam Navlakha has been put under house arrest.

Husain said she and Navlakha are under constant surveillance with policemen present at the residence. She said she felt "worst" to be surrounded by policemen all the time and be "constantly watched".

"This morning, I ensured the three policemen, including a woman constable, was moved outside the house. The lawyer gave them a piece of her mind after which they moved out," she told PTI.

She added that it was a relief for them.

"We are alone in the house today. There was a constant police presence inside. We wake up to them. Wherever we go inside the house, they watched us. It completely disorients your mind," Husain, who has been with Gautam Navlakha since his house arrest, said.

"Police have now put up a red cloth around the house to prevent people from getting to know their activities inside. No relatives, no friends, even people who help Navlakha with his bank work are not allowed inside," she rued.

"We are managing our day-to-day activities somehow," said Husain.

Since no outsider, other than the policemen, is permitted to enter the residence, Husain has to go out to meet her friends. She said she is scared of leaving Gautam Navlakha alone.

Husain said ever since the Supreme Court direction, her phone has been buzzing with calls and messages from well-wishers, who want to know how they are managing.

She however, said Gautam Navlakha appears confident and says he is prepared for "any outcome".

"We are quite confident. It is for the police to probe charges. We are sure nothing substantial will come out. It cannot harm them (the activists)," said Husain.

Gautam Navlakha was arrested on August 28 after searches in several cities that resulted in the arrest of four other activists. A transit remand was secured from Saket district court to take Gautam Navlakha to Pune, but the high court stayed the order. The Supreme Court on Wednesday ordered the Maharashtra police that the activists be kept under house arrest till September 6.