Police said that they have found two suicide notes, one for 15 pages and other of two pages but refused to share the details. 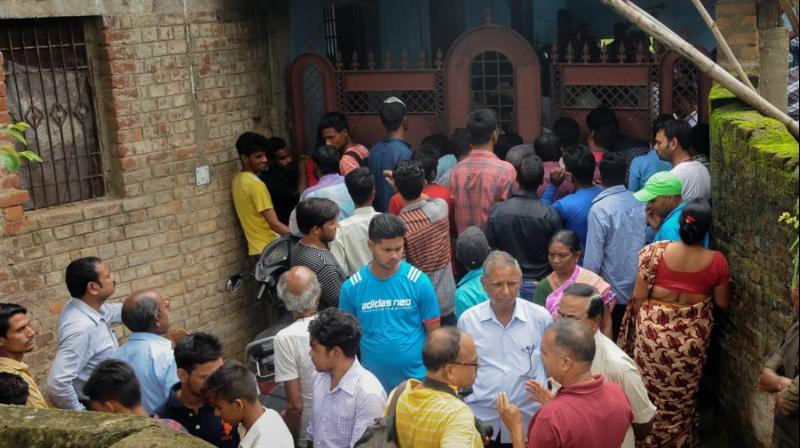 People gather outside the house where seven members of a family allegedly committed suicide, in Ranchi on Monday, July 30, 2018. (Photo: PTI)

Ranchi: In another mysterious case of death, seven members of a family were found dead in their home in Ranchi on Monday.

The deceased, Deepak Kumar Jha allegedly committed suicide along with his including his parents, wife, two children and brother.

According to report, police found the bodies of brothers hanging from ceiling fan. The rest of the family was found dead on bed.

The dead were identified as Shashi Kumar Jha, 65, a retired railway employee, his wife Gayatri Devi, 60, along with their sons Deepak Jha, 40, and Rupesh Jha, 39, Deepak’s wife Soni Jha, 38, and their children one-year-old son Jagu and six-year-old daughter Drishti.

According to the landlord, Jha wanted to set up his own business but was steeped in debt and Rupesh Jha, his younger brother was unemployed.

According to some neighbours, the family was facing a huge financial crisis and the treatment of the youngest member of the family may have driven them to commit suicide.

Anish Gupta, Senior police officer said, “It seems a case of suicide but let the investigations get over.”

Deputy inspector of police said that they have found two suicide notes, one for 15 pages and other of two pages but refused to share the details. He also said prima facie investigations reveal that brothers killed the five members of the family and later hanged themselves.

The bodies were found by a school girl who went and knocked at the door as school van of Deepka Jha’s daughter kept honking but got no response.

Recently, on July 1, 11 members of a family were found hanging in their home in Delhi’s Burari. From number of diaries found, getting material for their own suicide, investigators have said that mass suicide was driven by blind faith that the ‘ritual’ would help them to attain salvation.