'He is a very tough person like the people of Tamil Nadu. He has the spirit of Tamil Nadu in him,' he said after visiting Karunanidhi. 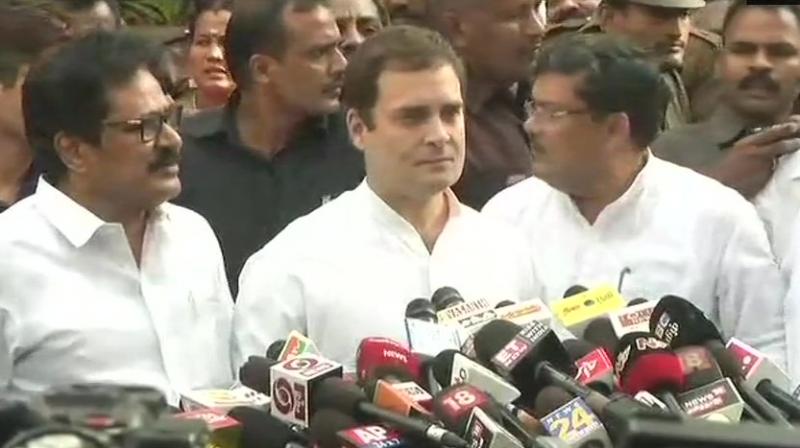 Chennai: DMK president M Karunanidhi was in the intensive care unit of a city hospital for the fourth day on Tuesday where Congress chief Rahul Gandhi visited him and described his condition as stable.

"I met him, he is fine, stable. I am quite happy to see that he is doing well. He is a very tough person like the people of Tamil Nadu. He has the spirit of Tamil Nadu in him," Rahul told reporters after visiting Karunanidhi.

After spending about 15 minutes at the hospital, the Congress president said his mother and predecessor Sonia Gandhi had sent her best wishes and regards to Karunanidhi and his family.

The Congress party has a long-standing relationship with DMK chief Karunanidhi, he said.

The Congress president, who landed at the airport here from New Delhi in the afternoon, headed straight for the Kauvery Hospital in downtown Alwarpet amid tight security. He was received by DMK working president M K Stalin and other senior leaders at the hospital.

DMK cadres continued to stay put outside the hospital premises despite a sudden downpour in the afternoon.

On Dec 17, 2016, Rahul Gandhi had visited Karunanidhi at the same hospital when the nonagenarian leader was undergoing treatment for lung and throat infection.

Traffic diversions were made in the city for the visit of the Congress president.

Earlier in the day, Health Minister C Vijayabaskar had said Karunanidhi was "stable and breathing on his own".

A statement from the hospital said that Karunanidhi continued to maintain his vital signs with active medical support. It added that an extended period of hospitalisation would be necessary due to age related overall decline in his general health, altered liver functions and haematological parameters.