India   All India  31 Jul 2018  For Congress, the more the merrier against Modi
India, All India

For Congress, the more the merrier against Modi

In right earnest, Mamata is set to visit the national capital this week when she is expected to have talks with leaders of all like minded parties. 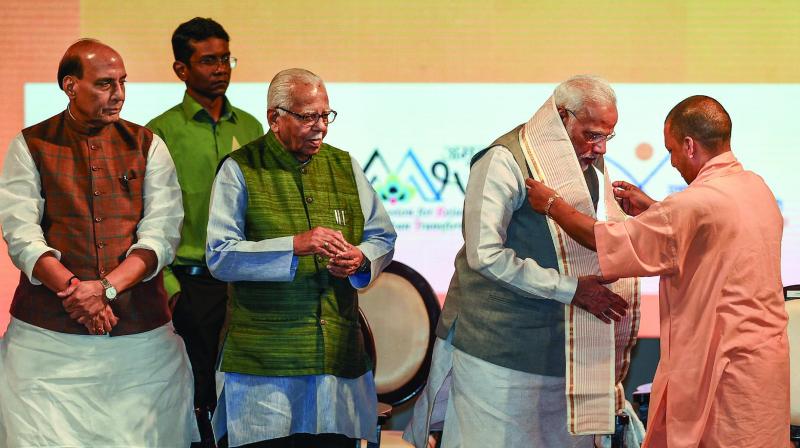 Signal from the Congress that anyone in the Opposition not aligned with the RSS and the BJP could be the Prime Minister if Narendra Modi is defeated in the Lok Sabha polls has come as a bit of a surprise for the BJP causing confusion in the saffron camp.

The signal has come after the “jadoo ki zappi” in the Lok Sabha, followed by a meeting of the CWC and an informal interaction by Congress president Rahul Gandhi with journalists, developments in quick succession at a time when the ruling side is not in the pink of health.

Charm offensive by Rahul is spreading. He is out to sell himself as a liberal, open and a warm hearted politician who understands that india is a bouquet of flowers with their distant beauty and fragrance.

In Narendra Modi’s India, it means a new narrative. Start of a different story in line with the changing India. How much it will click would be known in coming days and months. At least one thing is clear that things are not the same and it is in no way a one sided fight this time as things stand today.

The Congress declaration that it was not averse to a non-Congress leader becoming the Prime Minister if the Opposition unitedly succeeds in defeating the Modi dispensation in the next Lok Sabha elections whenever they are held much before or by May 2019, as scheduled has suddenly stirred up things.

Whether it is Mayawati who wants to be the Prime Minister or whether it was for Mamata Banerjee to don the mantle at the national level or if there was any other ambitious leader to do so, the field is wide open for all of them is now the message from the Grand Old Party. The condition that the leader should not have an RSS or a BJP tag is in line with the prevailing political climate.

If proof of the pudding is in the eating, then the new strategy appears to have started working. NCP supremo Sharad Pawar, who had missed the bus at least twice in the past when he was in the Congress, was quick to have a “good” meeting with BSP supremo Mayawati, who holds the key for the Opposition to Uttar Pradesh. Maya is a tough customer.

In right earnest, Mamata is set to visit the national capital this week when she is expected to have talks with leaders of all like minded parties.

Maya and Mamata have been self-made leaders and have not been the product of a dynasty. The West Bengal chief minister, who virtually single-handedly removed the entrenched Marxists from power, comes from the Congress stock like Pawar. Talk is also that Sonia Gandhi is planning to host a dinner for leaders of like minded parties before the end of the current Monsoon Session of Parliament.

The move would clear up things as the Congress Working Committee meeting over a week back had obviously rooted for Rahul Gandhi for the top job and had apparently kept issues hanging while authorising the party chief to decide on the issue of alliances.

Talk is that former Union minister P. Chidambaram made it plain at the CWC meeting that the salvation lay for the Congress in taking along all the like-minded non-BJP parties. This was necessary in view of the fact that the Grand Old Party is now restricted to some 30O of the total 543 seats, having a clear footprint in only 12 out of the total 29 states. One cannot live in past glory.

The immediate task before 48-year-old Rahul Gandhi is to see the back of Modi who is boasting, rightly or wrongly, that he has achieved more in his 48 months of power what the Congress failed to do so in 48 years. It is time to call the bluff.

Another Modi victory means more than death for the Congress, a party leader remarked reflecting on what the party and its leadership had to suffer in the past four years.

So, now the new formulation is like “let 100 flowers bloom”. But not exactly like in 1956 when Mao utilised the Hundred Flowers campaign to purge his detractors in the Communist Party. The Congress strategy appears to be to encourage the allies to put their best foot forward so that the tally of the opposition grows fast. The aura and the magic of the Prime Minister’s post is being utilised to move the mountains.

What else could Congress have done given the fact that there were no backers for “Rahul as PM” call from any Opposition party except the JD(S) which is basking in the reflected glory of power in Karnataka due to the unconditional support from Rahul and Sonia Gandhi.

Congress managers put it differently. “What is wrong in competition?” meaning thereby it would enthuse all concerned to work feverishly for the common cause, the larger goal.

The strategy works both ways. It helps resolution of the jigsaw puzzle by cementing the best possible arrangement against the Narendra Modi-Amit Shah combine and also gives much leeway to the Congress to get an upper hand if it plays its cards right.

As a Congress leader put it:  “Don’t go by the number of seats of the total 543 in the Lok Sabha we contest. If we achieve a strike rate of minimum 50 per cent if we contest some 300 seats. Then the game is up for grabs”.

A Union minister echoed similar sentiments, “Please don’t be fooled by what the Congress says. Even if they get two seats, they will say Rahul should become the Prime Minister.”

In May 2004, the Congress had secured 145 seats via the UPA-I route some six to seven more than the BJP under Atal Behari Vajpayee who lost power. Now Rahul has to show whether he could be one up on his mother.

Tragedy is that some Congress leaders are saying that the party could focus on just 150 seats as it does not have resources.

Rightly or wrongly, the recurrent theme during interaction with Opposition leaders is the paucity of funds they are facing as against the ruling party which is flush with funds. Claims are that the BJP is rich in resources and therefore the battle 2019 could never have a level playing field.

BJP leaders insist that the Opposition is busy in only building castles in the air and Modi is going to romp home again comfortably as their calculations would be going haywire. In an aspirational India, Modi has emerged the first BJP leader who has broken the caste and creed barrier to become the leader of the poor who offers hope for tomorrow, is the refrain of the ruling party.

The sacred games that would decide the winner and the loser are not far off.