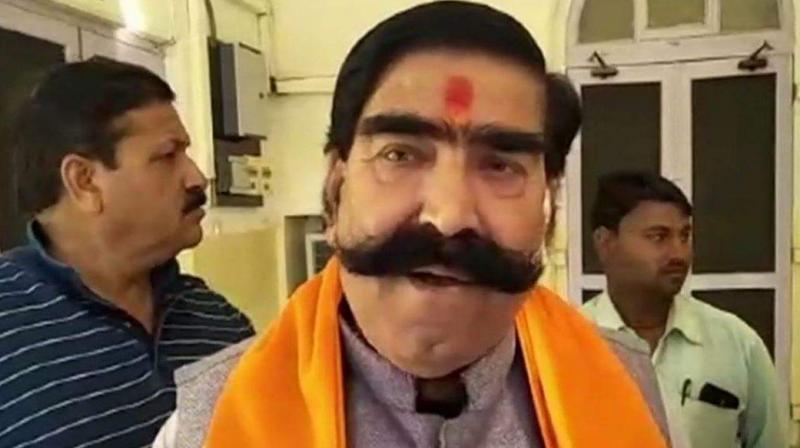 BJP MLA Gyan Dev Ahuja said cow slaughtering will incite people and hurt their sentiments, which will lead to some incidents. (Photo: File)

Jaipur: Amid repeated cases of alleged mob killing by cow vigilantes in Rajasthan's Alwar, BJP MLA Gyan Dev Ahuja on Monday said cow slaughtering is a bigger crime than terrorism as cows are treated as mothers in India and any 'misbehaviour' with them cannot be tolerated.

Ahuja, who had earlier accused the local police for the recent case of alleged mob killing in which one Rakbar alias Akbar Khan died after being thrashed by a cow vigilante group, said terrorists kill 2-5 people, but cow slaughtering hurts sentiments of several thousands and even lakhs of people.

Speaking to reporters at the BJP headquarters, the legislator said cow slaughtering will incite people and hurt their sentiments, which will lead to some incidents.

"Court should accept this. How should such incidents be stopped?" he said.

The comments from Ahuja, BJP MLA from Ramgarh constituency in Alwar, follows arrest of three women today in Alwar's Govindgarh with nearly 40kg suspected beef after it was alleged that a family belonging to minority community allegedly slaughtered a cow at their residence to sell the beef.

Ahuja said India is a country which respects mother and "Geeta, Dharti (land), cow, Ganga, Tulsi and a birth giver" are treated as mother in the country.

He said any 'misbehaviour' or 'goodanism' with the mother is not tolerated in this country and therefore it is a bigger crime than terrorism.

While it was alleged by his rivals that the the people involved in the Rakbar case were his men, Ahuja had blamed the local police for the incident and had demanded a judicial inquiry or a CBI probe into the case to ensure "unbiased investigation".

Last week, Ahuja had also demanded release of three people arrested for allegedly killing of 28-year Rakbar on suspicion of the victim's involvement in smuggling cows.

Rakbar and another man, Aslam, were taking two cows from Alwar to their village in Haryana through a forest area when a group of people spotted them and caught Rakbar. He was badly beaten while Aslam managed to escape, as per the police.

The victim was taken to the community health centre in Ramgarh by the police after an alleged delay of nearly two and a half hours and he was declared brought dead at the hospital.