CBI had on July 19 filed chargesheet against Congress leader, his son Karti, 10 individuals and six companies as accused in case. 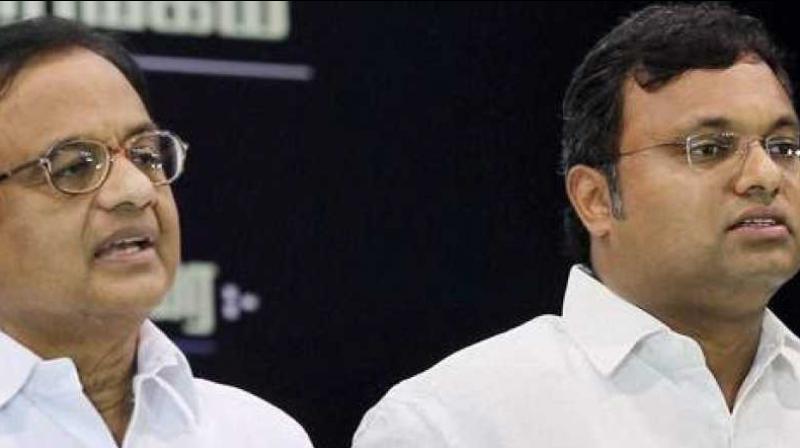 The senior Congress leader's role has come under the scanner of investigating agencies in the Aircel-Maxis deal of Rs 3,500-crore and the INX Media case involving Rs 305 crore. (Photo: PTI)

New Delhi: A Delhi court on Tuesday granted two months time to the CBI for obtaining sanction from authorities concerned to prosecute certain accused in a case against former Union minister P Chidambaram and his son Karti for alleged irregularities and criminal conspiracy in the Aircel-Maxis deal case.

The agency had on July 19 filed chargesheet against the Congress leader, his son Karti, 10 individuals, including public servants, and six companies as accused in the case.

"Adjourn the matter for October 1," the court said.

Mathur, who appeared on behalf of the Central Bureau of Investigation, told the court that the agency was expecting sanctions for prosecution from concerned authorities in about four weeks.

The CBI is probing as to how Chidambaram, who was the Union finance minister in 2006, granted a Foreign Investment Promotion Board (FIPB) approval to a foreign firm, when only the Cabinet Committee on Economic Affairs (CCEA) was empowered to do it.

The senior Congress leader's role has come under the scanner of investigating agencies in the Aircel-Maxis deal of Rs 3,500-crore and the INX Media case involving Rs 305 crore.

In its chargesheet filed earlier in the case against former telecom minister Dayanidhi Maran, his brother Kalanithi Maran and others, the agency had alleged that Chidambaram had granted an FIPB approval in March, 2006 to Mauritius-based Global Communication Services Holdings Ltd, a subsidiary of Maxis.