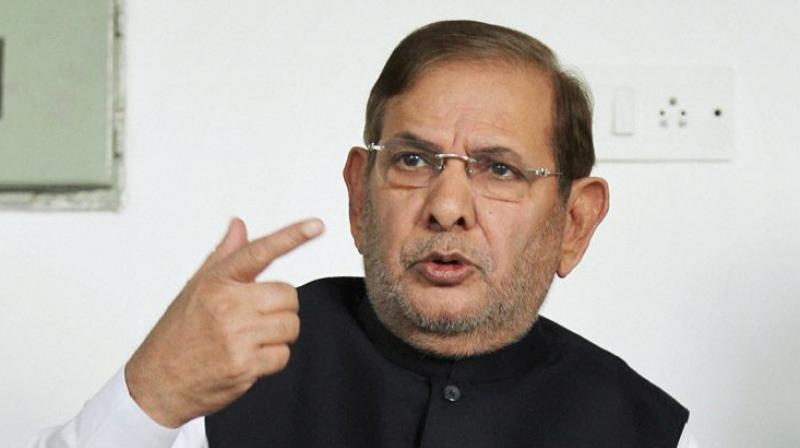 Patna: Senior JD(U) leader Sharad Yadav, who is reportedly upset over Bihar chief minister Nitish Kumar’s sudden decision to quit Grand Secular Alliance and form the government in Bihar with the BJP, has been getting regular invitations from Lalu Yadav.

RJD chief Lalu Yadav said that he wants to join hands with Sharad Yadav to fight against communal forces in Bihar as well as at the national level.

“We share the same ideology and I have asked Sharadji to help us wage a war against BJP and communal forces in Bihar and at the national level. We have been talking to each other about the issue,” said RJD chief Lalu Yadav.

Last week, Mr Anwar said, “Nitish Kumar took a decision by listening to his inner voice, but my conscience doesn’t allow me to support his decision to join hands with BJP.”

Mr Sharad has so far maintained silence on the issue. Sources on Sunday stated that “Sharad Yadav is regularly in touch with Lalu Yadav”.

On Sunday, after Lalu Yadav urged him to take part in fight against the BJP, Sharad Yadav tweeted about the ineffectiveness of the Modi government in bringing back bla-ck money stashed abro-ad.

“Neither black money stashed abroad returned, one of the main slogans of the ruling party, nor did anyone named in Panama papers get caught,” tweeted Mr Sharad.

Earlier, Mr Lalu had said that he wanted Sharad Yadav to join hands with him before BJP Hatao Desh Bachao rally on August 27.

Reports coming from rural areas suggest that the rally may turn out be Lalu Yadav’s biggest show of strength.

The RJD has also planned to move court against Bihar governor’s invitation to Nitish Kumar led NDA coalition to form a government in the state.  Quoting the SR Bomai judgment, RJD spokesperson Manoj Jha said, “It is mandatory to call the single largest party first to explore the possibility to form the government”.

The RJD leader said that the party is planning to move court within a week.