Modi sarkar 2.0: Old, new faces in PM's cabinet; portfolios to be out today

The first meeting of the new Union Cabinet will take place on Friday at 5:30 pm, a government official said. 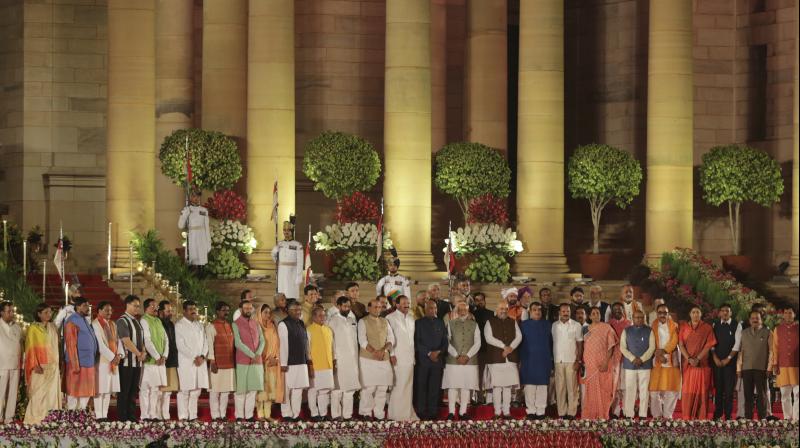 New Delhi: On Friday, Prime Minister Narendra Modi, 24 cabinet ministers, nine minister of state with independent charge and 24 ministers of state made up the 58-member team.

The first meeting of the new Union Cabinet will take place on Friday at 5:30 pm, a government official said.

President Ram Nath Kovind administered the oath of office and secrecy to Modi and ministers at the function which was attended by heads of government and representatives from BIMSTEC countries, besides Prime Minister of Mauritius and President of Kyrgyzstan.

Here is the list of the Cabinet ministers that sworn-in:

Amit Shah: He has been the BJP president since 2014. Shah is among the rapid achiever among the BJP workers. At an early age, he joined politics. During Modi’s tenure as Gujarat CM, Shah was the confidant and his right hand. In 2014, his political career took a major jump when he was appointed as the president of the BJP.

Nitin Gadkari: He has held various portfolios including the Minister for Road Transport & Highways, Shipping and Water Resources, River Development & Ganga Rejuvenation. He earlier served as the President of the BJP from 2010-2013.

DV Sadananda Gowda: He is the former chief minister of Karnataka who was shunted from ministry to ministry during Modi’s first term. His induction in the cabinet came as a surprise to many political observers in Karnataka.

Nirmala Sitharaman: During Modi’s first term, she served as the Minister of Defence of India since 2017. She is India's second female defence minister. Sitharaman also served as a national spokesperson for the BJP

Ram Vilas Paswam: He is an eight-time Lok Sabha member and president of the Lok Janshakti Party. Paswan did not contest the 17th Lok Sabha election, but is set to take the route to Parliament through the Rajya Sabha.

Narendra Singh Tomar: He played a key role in implementing the Pradhan Mantri Awas Yojna, as union minister for Rural Development, Panchayati Raj, and Mines in the 2014 cabinet.

Ravi Shankar Prasad: He is a first-time member of the Lok Sabha from Patna Sahib. He defeated former BJP colleague Shatrughan Singh, who contested as Congress candidate.

He has held several ministerial portfolios, including the law and justice and electronics and information technology, in the first term of the Narendra Modi government.

Harsimrat Kaur Badal: She is from the Shiromani Akali Dal. Badal was elected for the third consecutive time from Bathinda, where she defeated Congress’ Amarinder Singh. During Modi’s first term, she was the minister for food processing.

Thwarchand Gehlot: He is a Dalit face of the Bharatiya Janata Party. In 2014, he was appointed as the Minister of Social Justice and Empowerment.

S Jaishankar: He is a former Indian diplomat and served as a Foreign Secretary from January 2015 to January 2018. He had previously served as Indian Ambassador to the United States (2014–2015), China (2009–2013) and the Czech Republic (2001–04), and as High Commissioner to Singapore (2007–09). Jaishankar also played a key role in negotiating the Indo-US civilian nuclear agreement.

Ramesh Pokhriyal: He has been elected from the Hardwar Lok Sabha constituency for the second time. At the age of 50, he became the fifth and the youngest chief minister of Uttarakhand in 2009 and held the position until 2011.

Arjun Munda: He is a three-time chief minister of Jharkhand and is considered one of the most prominent tribal leaders in the state.

Smriti Irani: She won the Amethi seat and defeated Congress president Rahul Gandhi by around 55,000 votes. This is the first time she has won a Lok Sabha election.

She has held portfolios including Information and Broadcasting, Human Resource Development and Textile ministry.

Harsh Vardhan: He is a two-time MP from Delhi’s Chandni Chowk Lok Sabha constituency. He defeated Congress’s J P Agarwal by over 200,000 votes. After his victory from Chandni Chowk in 2014, he was inducted in the Modi cabinet and given the high-profile Health Ministry. In 2017, he was given additional charge of the Environment, Forest and Climate change ministry.

Prakash Javadekar: Over the last five years, he has held a number of ministries including the Human Resource Development, Environment, Forest and Climate change and Information and Broadcasting.

Piyush Goyal: He has emerged as the BJP’s go-to man in the last five years. He has also held additional charge of the finance ministry when Arun Jaitley was unwell and tabled the interim budget ahead of the 2019 general elections.

Dharmendra Pradhan: He played a key role in the Pradhan Mantri Ujjwala Yojana, a scheme of distribution of gas cylinders to women who are below the poverty line, and living in rural areas.

After he became Union minister in 2014, Pradhan became the most visible face of BJP in Odisha. Pradhan also helped guide the BJP’s social media strategy during the polls.

He has served as vice-president, general secretary and spokesman of the BJP.

Pralhad Joshi: He is a four-time MP from Dharwad in Karnataka and was overlooked for a ministerial post in the first term of the Narendra Modi government in favour of two other Brahmin leaders from the state, Ananth Kumar and Anantkumar Hegde

Mahendra Nath Pandey: He is an Indian politician who has been a Member of Lok Sabha for Chandauli since 2014. He is the president of the party's Uttar Pradesh unit. He has also served as Union Minister of State for Ministry of Human Resource Development between 2016 and 2017.

Arvind Sawant: He is known for his good oratory skills and an ability to develop relations across parties. He is a Shiv Sena member and defeated Congress’s Milind Deora by a margin of over 100,000 votes.

Giriraj Singh: He won the 2019 Lok Sabha elections from Bihar’s Begusarai by defeating CPI candidate Kanhaiya Kumar by over 420,000 votes.

Among the names which were a part of the last government but didn't take oath this time were Suresh Prabhu, Menaka Gandhi, J P Nadda, Radha Mohan Singh Rajyawardhan Singh Rathore and Satyapal Singh.