India   All India  31 May 2019  IAF erects Rafale replica outside Air Chief's house, in front of Congress HQ
India, All India

The first Rafale is expected to be handed over to the Indian Air Force in September 2019. 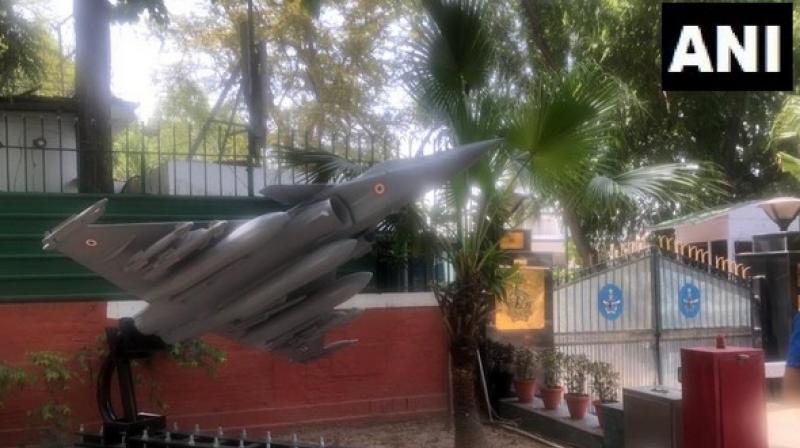 Replica of Rafale located at residence of the Air Chief Marshal numbered 23, is right in front of Congress Headquarters, number 24, on Akbar Road in the national capital. (Photo: ANI)

New Delhi: Replica of a Rafale fighter aircraft has been erected outside Air Chief Marshal BS Dhanoa's residence by the Indian Air Force in Delhi.

Residence of the Air Chief Marshal numbered 23, is right in front of Congress Headquarters, number 24, on Akbar Road in the national capital.

Earlier, a model of the Sukhoi Su-30 was set up at the same place before being removed a few months ago.

The first Rafale is expected to be handed over to the Indian Air Force in September 2019 but it would be required to undergo intensive 1,500 hours of testing to validate the India Specific Enhancements on it.

So, the first batch of the four planes is likely to arrive at Ambala around May 2020.

Air Chief Dhanoa has dubbed the fighter as a "game changer" for the IAF.

"IAF is about to get two squadrons of Rafale. Rafale has the capability that no enemy can interfere in the air operations which is a big thing. It will come and change the balance back to us," he had told ANI in Bathinda earlier this month.

In September 2016, India signed a deal with the French government and Dassault Aviation to acquire 36 Rafale fighter jets for over Euro 7.8 billion to arrest the fall of combat squadrons and meet urgent requirements on the eastern and western fronts.

The Congress has repeatedly levelled allegations against the BJP government for alleged wrongdoings in the deal and has accused Prime Minister Narendra Modi of corruption, which the ruling party has out rightly denied.

Congress president Rahul Gandhi also made it an election issue and raked up the matter at every campaign rally in run up to the Lok Sabha elections.

The party even promised a probe into the alleged irregularities on coming to power.

On December 14, 2018, the Supreme Court had dismissed all petitions seeking a court-monitored probe into the deal, saying that there was no occasion to doubt the decision-making process in the deal.

The top court had then said that it was not its job to go into the issue of pricing. The bench, headed by Justice Gogoi, said that there is no need to conduct an investigation into the details of Rafale pricing.

The petition stated that the verdict contains several errors and also it relies upon patently incorrect claims made by the government in an unsigned note given in a sealed cover to the court, which is a violation of the principle of natural justice.

The Centre, on May 25, filed written submissions in the Supreme Court stating that all review petitions seeking investigation into the deal should be dismissed.