The move to enhance ties with Jakarta is significant given the increased Chinese assertiveness in Southeast Asia. 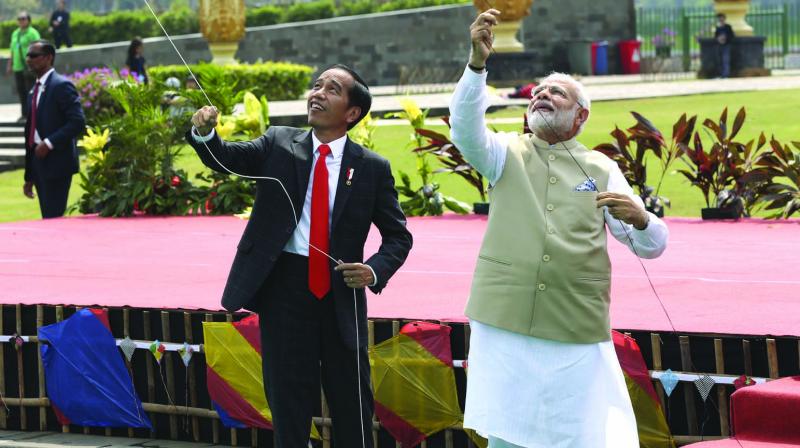 New Delhi: Prime Minister Narendra Modi and Indonesian President Joko Widodo held talks in Jakarta on Wednesday, after which the two countries decided to “establish a New Comprehensive Strategic Partnership” and announced the setting up of “a joint task force to undertake projects for port-related infrastructure in and around Sabang” (a strategically-located Indonesian island at the northern tip of Sumatra, near the Malacca Straits, to which New Delhi will now gain access). Sources said India is only the second country after China with which Indonesia has established a Comprehensive Strategic Partnership.

It was also decided to boost connectivity between Sabang island and India’s Port Blair in the Andaman and Nicobar Islands, which are a few hundred nautical miles apart. While the development of the strategically-located port is expected to benefit India economically, there is no official word yet on whether this could translate in the future to Indian military access to the port. Crucial global shipping lines pass through the Malacca Straits.

The move to enhance ties with Jakarta is significant given the increased Chinese assertiveness in Southeast Asia. Significantly, both countries also issued a “Shared Vision of India-Indonesia Maritime Cooperation in the Indo-Pacific” to “strengthen the existing security architecture in the Indo-Pacific”. The two nations also signed 15 pacts, including one on defence, that relates to “consultation on strategic defence and military issues of common interest and exchange of strategic information”. The two leaders also “agreed to hold annual summit meetings, including on margins of multilateral events”.

In what is seen as a veiled message to Beijing, both New Delhi and Jakarta jointly stressed adherence to the rights and obligations under international law, including the 1982 UN Convention on the Law of the Sea (UNCLOS)  while “reiterating the importance of achieving a free, open, transparent, rules-based, peaceful, prosperous and inclusive Indo-Pacific region”. It was also decided to strengthen the existing naval cooperation, including the bilateral coordinated patrols initiated in 2002 between the navies of the two countries as well as commencement of regular bilateral naval exercises.

A joint statement stated: “Both leaders agreed to strengthen cooperation in all areas by establishing a New Comprehensive Strategic Partnership to take Indonesia’s and India’s bilateral relationship into a new era. Indonesia and India are not just close neighbours but fellow democracies with shared interests and a common future.”

It added: “The leaders noted the successful visit of coordinating minister of maritime affairs of Indonesia to India on 17-19 May 2018. In this regard, the leaders appreciated the decision to set up a joint task force to undertake projects for port-related infrastructure in and around Sabang.”

“The leaders welcomed the first Trilateral Senior Officials Strategic Dialogue involving Indonesia-India-Australia in Bogor, Indonesia, on 27 November 2018 and underlined the importance of open and frank dialogue as well as exchange of best practices among like-minded democracies,” the joint statement significantly said.

Agreements were signed between the two nations in the fields of defence, space, science, health and railways.