Covid19 cases in J&K climb to 48, J&K hospitals in doldrums

In J&K, as many as 11, 644 travellers and persons in contact with suspected cases are under surveillance, including 355 in quarantine 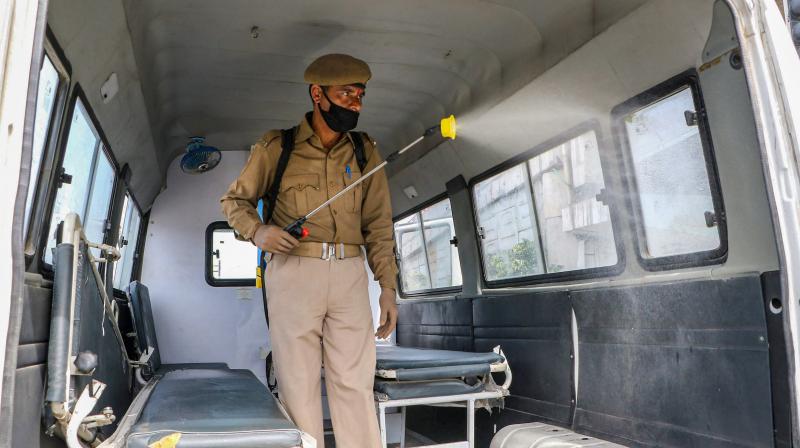 A police personnel spray disinfectants inside a vehicle as a precautionary measure during the nationwide lockdown imposed in the wake of coronavirus pandemic, in Jammu on Monday. PTI photo

Photographs and videos portraying purported chaotic conditions in some of Jammu and Kashmir hospitals have gone viral on social media as the Covid-19 tally in the Union Territory (UT) went up further on Monday with ten more persons testing positive for the deadly virus.

One of the photographs showed stray dogs roaming freely along a corridor of Srinagar’s government-run Chest Disease (CD) Hospital designated as a facility for Covid-19 patients. A pinned tweet read “I’m shocked, I was just talking over phone to my cousin and another patient --- both Covid-19 +ve patients at CD Hospital. Dogs are in ward attacking patients. Also doctors asked them to get medicines from outside. Is this our healthcare system level?

However, in another tweet, same person Khalid Rathore said that his cousin’s medical reports clearly show him as suspect for Covid-19 but he has been put together with confirmed positive cases of the disease. “Just checked medical reports of my cousin, which clearly show suspect for Covid-19 that means he has not been yet confirmed +ve for the same. Then, why has he been kept with +ve cases where he can easily and is likely to get infected?”

Last week, a woman suspected to have been stuck by the disease had fled the hospital in the dead of the night and later reported at Srinagar’s Sher-i-Kashmir Institute of Medical Science (SKIMS). Her family had sought to justify her act saying she left the hospital after a horde of stray dogs entered the premises. Srinagar’s mayor Junaid Azim Mattu had, after photographs showing presence of dogs inside the hospital went viral, promised to secure the premises by erecting a wall.

At the weekend, as many as 26 Covid-19 suspects jumped quarantine at Srinagar’s Jawaharlal Nehru Memorial (JLNM) Hospital amidst chaos triggered by a violent protest over poor medical facilities. The protesters allegedly broke furniture and window panes in the hospital in the City’s Rainawari area and were joined in the rampage by their relatives who had been waiting outside.

However, as per a statement of Srinagar’s DC, Shahid Iqbal Choudhary, all the quarantine fugitives were quickly traced and brought back to the hospital with the help of the police. Later in the day, the authorities sacked a doctor and suspended another for negligence.

The authorities here admit that the hospitals and other medical facilities in the UT, mainly Kashmir Valley, have been overcrowded with the increase in the number of both confirmed and suspected Covid-19 cases. But, they insisted that best possible treatment is being provided to all patients and those under observation too are being looked after well. “We’re making every possible effort to make everyone who is with us comfortable. Any gaps that might be there will be filled and all weaknesses removed soon,” said Dr Naveed Nazir Shah, HOD at the CD Hospital in a video message.

He had in a recent tweet complained that patients were not cooperating with the hospital authorities and demanded security. “Request for administration... no security in hospital... patients not cooperating...they roam about on the hospital defeating the motive of isolation....need hospital security”, he said. Responding to it, Srinagar’s DC assured him “Deployment will be strengthened. Request everyone to cooperate with doctors. They are putting in their best”.

However, Dr Shah on Sunday wrote on a micro-blogging site that some of the grievances and complaints of the Covid-19 patients were “genuine’ and that he has assured them that effort would be made to rectify them. He also said, “(we’re) trying to give the best out of the limited resources” and again requested people “to cooperate and break the chain”.

The government on Monday reported ten new positive cases of Covid-19, including three from Jammu division and seven from Kashmir Valley, taking the total number of such patients in the UT to 48. With one more person from Ladakh testing positive at a hospital in Jodhpur, Rajasthan, following his evacuation from Iran, the number of patients in or from the landlocked region has risen to 14.

The officials said that while most of Ladakh’s Covid-19 patients are recovering at Leh’s Sonam Narboo Memorial Hospital, out of J&K’s 48 positive cases 44 remain “active”, two have recovered and the remaining two have already passed away.

In J&K, as many as 11, 644 travellers and persons in contact with suspected cases are currently put under surveillance which include 355 persons who are in hospital isolation or quarantine. A report from Jodhpur said that a 41-year-old male resident of Ladakh among those evacuated from Iran last week was found Covid-19 positive at the city’s MDH Hospital.

Back home, the doctors at SKIMS claimed that the 67-year-old woman from Srinagar’s Khanyar area, who became the Valley’s first case of the Covid-19 has “recovered” as she tested negative for the novel disease.

G.H. Yatoo, nodal officer for Coronavirus at the SKIMS, said that the samples of the woman sent to the viral diagnostic and research lab have tested negative adding that she would, however, be kept in quarantine for a period of 14 days before a decision to discharge her or not could be taken.