The protesters on Friday wore 'rudhraksha' indicating a life of saints who has given up all earthly needs. 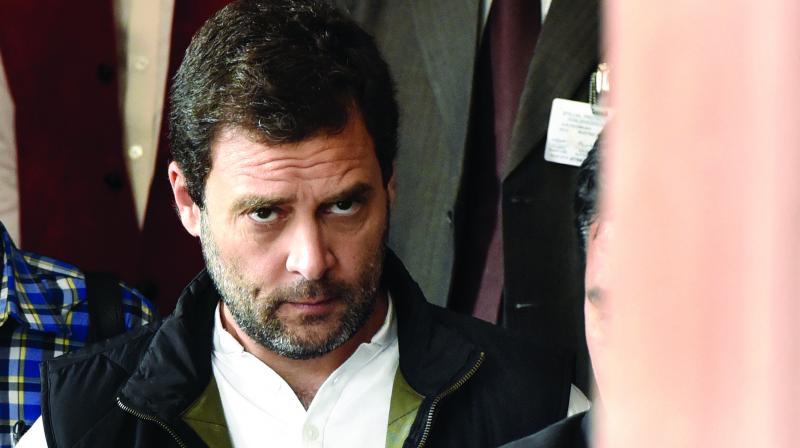 New Delhi: Congress Vice President Rahul Gandhi on Friday accused Prime Minister Narendra Modi of "disrespecting" the drought-hit farmers of Tamil Nadu by not initiating talks with them over their demands for relief package.

He made the remarks during a visit to Jantar Mantar to express solidarity with the farmers from the southern state who are camping here for the 18th day in a row.

Gandhi also accused the Modi-led government of being "anti-poor and anti-farmer" which, he alleged, only panders to the demands of a select group of industrialists.

"The farmers have been sitting here for so long. But neither the government nor the Prime Minister are listening to them. The people and farmers of Tamil Nadu deserve to be heard by the Prime Minister who is disrespecting them by not initiating any dialogue," he said.

"Over the last three years, debt worth Rs 1.4 lakh crore held by 50 industrialists have been written off.

"Why the same is not being done in case of the farmers? Why are their debts not being waived? It is the Prime Minister's responsibility to do so," Gandhi said after interacting with the protesters and their leader P Ayyakkannu.

During the 15-minute interaction, he took note of all the demands of the protesters and assured them that the Congress will "fight for them" and raise their grievances "in Tamil Nadu as well as in Delhi and Parliament".

The Centre needs to provide debt waiver, drought relief and better support price to the farmers. Also the Prime Minister should at least start talks with them, Gandhi said.

Farmers belonging to the Cauvery belt in Tamil Nadu are protesting here demanding a drought relief package of Rs 40,000 crore from the Centre, farm loan waiver and setting up of Cauvery Management Board.

The protesters on Friday wore 'rudhraksha' (seeds traditionally used for prayer beads) indicating a life of saints who has given up all earthly needs.

"We will die at the national capital instead of returning to our state empty-handed," Ayyakkannu said.

It has not rained and ground water levels have gone down at many places in the state. The water bodies are also drying.

The poor farmers, who depend on their crops, are the most vulnerable section of the society and they always become victims of various vagaries, the National Human Rights Commission had said.