Climate change is a global phenomenon but in an ecologically fragile zone like Ladakh, it is more discernable. 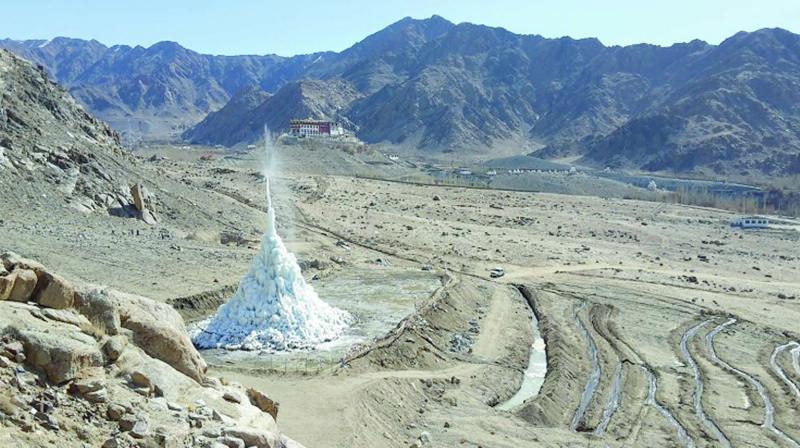 Ice stupa, the biggest man-made ice structure in the world, was made by Sonam Wangchuk in Ladakh in order to make water available during the sowing season.

When I was young there was a lot of snow and rain. The mountains were white till the end of May. But now the snow is less and the mountains are mostly green. It also rains a lot more now. That’s also why they are green”, notes Tundup Wangail, 80, a farmer in Phyang village, a vast windswept terrain surrounded by mountain peaks in Leh district, Ladakh. Rinchen Wangdus, 51, from the same village says: “Year after year, air pollution from vehicles and machines is melting our glaciers and ice caps at a very fast rate.”

Climate change is a global phenomenon but in an ecologically fragile zone like Ladakh, it is more discernable. A crucial area, this change is evident is in the access to water.  Traditionally, adjoining villages such as Phyang and Phey had a unique system of sharing water.  The first village in the line of streams flowing down from the mountain heights was Phyang. The village would irrigate all its fields, then let it flow down to Phey that then faced water shortage and took to drip irrigation.

Increasingly however, there are new challenges. Agriculture in this icy desert region is being fed almost exclusively by snow and glacial melts.  The catch is that natural glaciers found at high altitudes (18,000 feet and more) begin to melt only in the middle of June.  Thus, during the crucial sowing season between March and May, there is water shortage from this source.

Chewang Norphel, a former engineer in the Jammu and Kashmir department for rural development, observed that under the relentless sun at the height of summer, glaciers would melt fast. There was no way to store or harvest the water gushing down. He figured that if glaciers could be “created” in shady areas, at lower altitudes, they would not melt so fast. And would be available to the communities for irrigation. This was the germ of an idea that led Norphel to divert waters to flatter, shadier areas and create a small wonder — the artificial glacier.  Unlike its natural counterpart at high altitudes, these would stay frozen till early spring and then provide water for irrigation during the sowing season.

Norphel pioneering work in the mid-nineties won him acclaim as “Ice Man of India”. Significantly, it triggered an interest amongst other innovators. Sonam Wangchuk, a promoter of alternative technologiesand pedagogy, the founder of Students Educational and Cultural Movement of Ladakh (SECMOL) — took up the gauntlet.

Norphel’s glaciers being flat, with a large surface area, melted too fast. Wangchuk hit upon the idea of constructing vertical cones of ice to reduce surface area, slow down the melting and make the water last longer.

In 2014, Wangchuk, with a team of SECMOL students constructed a prototype on the banks of Indus River at an altitude of 10,400 feet — the warmest possible location and the lowest possible altitude. If it could work here, it could work anywhere.

Dadul, a member of the construction team, says: “we faced many problems — the pipes would freeze and their quality was sub-standard. The situation was salvaged when Jain Irrigation stepped in to quickly supply good quality pipes”. Dadul’s face lights up as he says, “no electricity has been used to pump the water to a higher level. The structure relies on the principles of ‘water finding its own level’.”

Long pipes dug six feet deep brought water from an upstream river during the winter months to the site. The water gushing out from the ground through a pipe to reach the tip was “powered” by gravitational pressure. The water would freeze instantly on contact with the sub-zero temperature of Ladakh! A conical scaffolding gave the glacier its shape that gradually reached a height of 64 feet.  It broke the Guinness’ Book of World Records of the biggest man-made ice structure. This first vertical artificial glacier became famous as the “Ice Stupa”. Stupa because its shape was like the mounds used to house relics and for meditation in the Buddhist tradition.

Word spread quickly drawing curiosity, interest and support. His Holiness Drikung Kyabgon Chetsang Rinpochey, the head of Phyang monastery with an abiding concern for the environment, saw its great promise. With his support, a large tract of land was made available in Phyang to upscale the prototype. The Ice Stupa would move from its “nursery” to the world beyond. The project was crowdfunded, and $125000 raised through Indiegogo, aninternational crowdfunding website.

The construction was completed in 2015. It was truly a spectacular sight, towering over fields and homesteads in Phyang. It lived up to its promise and made water available during the crucial sowing months from March to May when glacial melt from natural glaciers was not flowing down.

The gigantic ice structure that does not use concrete, electricity or dams either during construction nor for water harvesting — changed the face of Phyang, The area would have been an arid zone otherwise. Sonam Wangchuk won the 2016 Rolex Award for Enterprise for his work on ice stupas, the funds from which would promote these structures as a climate-change adaptation and desert-greening technique.

The problem of melting glaciers and water shortages is an endemic one and globally there is a search for solutions that are organic, ecologically sound and thus scalable. The project at Phyang is a winner on these crucial counts and promises to be the one to show the way!

The writer is a recipient of the Sanjoy Ghose Rural Reporting Award 2016-17.