Submarine Karanj is the third of the six Scorpene-class submarines built by MDL under the Project 75 programme. 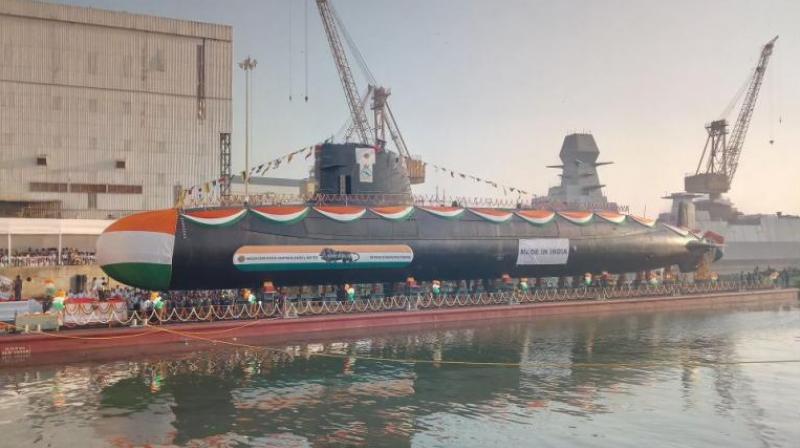 Submarine Karanj has an overall length of 67.5 metre and a height of about 12.3 metres. (Photo: Twitter | @indiannavy)

Navy Chief Admiral Sunil Lanba was the chief guest on the occasion.

Karanj is the third of the six Scorpene-class submarines built by MDL under the Project 75 programme. The first one, INS Kalvari, was commissioned on December 14, 2017 while the second one, Khandari, has already been launched and is undergoing sea trials and is expected to be commissioned later this year.

All the submarines are due to be inducted gradually into the Indian Navy by 2020.

The state-of-the-art features of the Scorpenes include superior stealth and ability to launch crippling attacks with precision-guided weapons.

The attacks can be carried out with torpedoes while submerged or on the surface -- in all war theatres including the tropics, giving it an unmatched invulnerability.

The submarine has an overall length of 67.5 metre and a height of about 12.3 metre. The hull form, fin and hydroplanes are specifically designed to produce minimum underwater resistance.

Erstwhile Karanj was commissioned in Indian Navy on September 4, 1969 and was retired on August 1, 2003. Karanj was reborn in a new avatar on Wednesday.

Karanj had served the nation for 34 years and also took part in 1971 operations.

Invocations were recited from Atharva Veda before Karanj touched water for the very first time on Wednesday.

The Scorpene submarines are a primary modernisation requirement of the Indian Navy, which is currently faced with an ageing submarine fleet, and that too when the Chinese navy has a growing presence in the Indian Ocean.