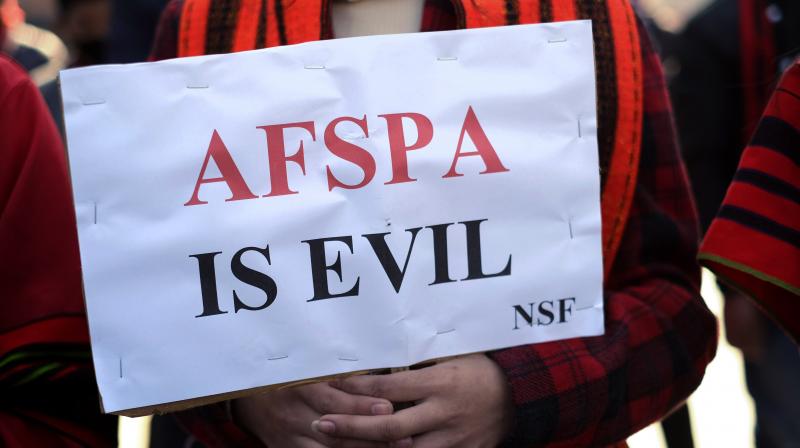 A Naga holds a placard during a rally protesting the killings of fourteen civilians by Indian army soldiers earlier this month, in Kohima, capital of the northeastern Indian state of Nagaland. (Photo: AP)

New Delhi: The Centre on Thursday declared the entire Nagaland as a "disturbed area" for six more months with effect from December 30 under the AFSPA while terming the state's condition "disturbed and dangerous".

The move came days after the Union government constituted a high-level committee to examine the possibility of the withdrawal of the controversial Armed Forces (Special Powers) Act from Nagaland.

The AFSPA has been operational in Nagaland for decades.

"Whereas the Central government is of the opinion that the area comprising the whole of the State of Nagaland is in such a disturbed and dangerous condition that the use of armed forces in aid of the civil power is necessary.

"Now, therefore, in exercise of the powers conferred by Section 3 of the Armed Forces (Special Powers) Act, 1958 (No.28 of 1958) the Central Government hereby declares that whole of the State of Nagaland to be 'disturbed area' for a period of six months with effect from December 30, 2021, for the purpose of the said Act," a home ministry notification said.

The notification was issued by the additional secretary in the Home Ministry, Piyush Goyal, who has been named the member secretary in the panel to examine the possibility of the withdrawal of the AFSPA. The committee is headed by secretary-level officer Vivek Joshi.

The high-level committee has been set up apparently to soothe the rising tension in Nagaland over the killing of 14 civilians.

Protests for the withdrawal of the AFSPA have been going on in several districts of Nagaland ever since an Army unit killed 14 civilians in the state's Mon district earlier this month, mistaking them as insurgents.

The AFSPA empowers security forces to conduct operations and arrest anyone without any prior warrant. It also gives immunity to the forces if they shoot someone dead.