India   All India  30 Dec 2020  Protesting farmers take a hard stand ahead of next round of talks
India, All India

The unions have deferred their proposed tractor march till Thursday, so that the rally does not clash with their talks with the government 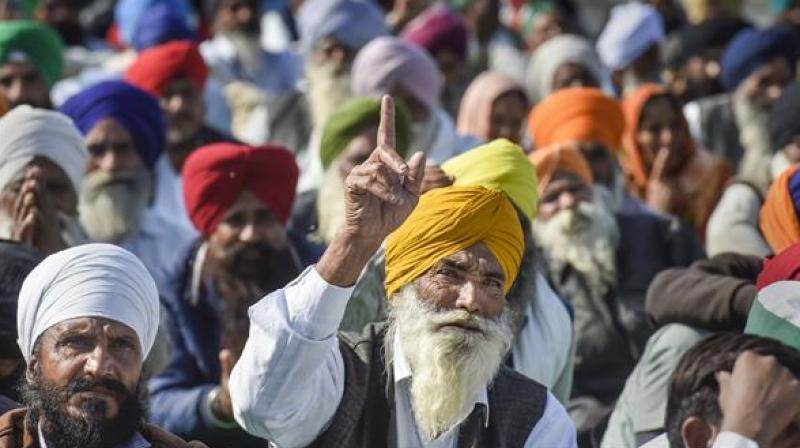 Farmers during a protest against the three agri laws at the Ghazipur-Delhi border on Monday. (PTI)

NEW DELHI: A day before the next round of talks, protesting farmers' unions took a hard stand and wrote to the Centre tightly ring-fencing the discussion scheduled to take place on Wednesday. In their letter to the government on Tuesday, the farmers unions wrote that the discussion will only be on the modalities of repealing the three farm legislations, giving a legal guarantee on Minimum Support Price, and on two other issues they proposed earlier this week.

The letter was sent on the day Union home minister Amit Shah chaired a high-level meeting with his Cabinet colleagues — Narendra Singh Tomar and Piyush Goyal -- to discuss measures which could put an end to the farmers’ month-long agitation at the Delhi borders.

The Samyukt Kisan Morcha, an umbrella organisation of 40 farmer unions, also wants a detailed discussion on the amendments which can be effected to get farmers excluded from the penal provisions of the Commission for the Air Quality Management in National Capital Region and Adjoining Areas Ordinance, 2020.

The farmer unions have deferred till Thursday their proposed tractor march against the three agriculture laws, so that the rally does not clash with their talks with the government. Earlier this week, the farmer leaders had announced a tractor march from the Singhu and Tikri borders to the Kundli-Manesar-Palwal (KMP) highway on December 30.

Shah’s meeting on Tuesday with his Cabinet colleagues was the second one in two days. A meeting was held on Monday, following which the Centre invited representatives of 40 protesting farmers' unions for the next round of talks.

Maintaining that the government is always ready to talk to the farmers with an open mind, agriculture secretary Sanjay Agarwal reiterated the Centre’s commitment to address all issues with an honest intent. So far, the Centre has stuck to its stand of not repealing the new farm laws. But it has been open to suggestions that will help break the deadlock with the protesting farmers, including tweaking the laws or even setting up a committee as suggested by the Supreme Court.

Shah, Mr Tomar, defence minister Rajnath Singh and top officials have also been engaged in backroom channel talks with socio-political groups and Sikh community leaders to find a “middle path” to put an end to the ongoing agitation.

While the Centre has also been blaming the Opposition parties for “misleading” the farmers on the new laws, Bharatiya Kisan Union spokesperson Rakesh Tikait, who is at the forefront of the protests at Delhi border, said, “If the Opposition were strong, there would have been no need for farmers to launch the agitation?"