India   All India  30 Dec 2019  'Happy that people of Jharkhand voted on issues faced by them': Tejashwi Yadav
India, All India

'Happy that people of Jharkhand voted on issues faced by them': Tejashwi Yadav

Tejashwi was among the opposition leaders who attended the swearing-in ceremony of Jharkhand CM Hemant Soren. 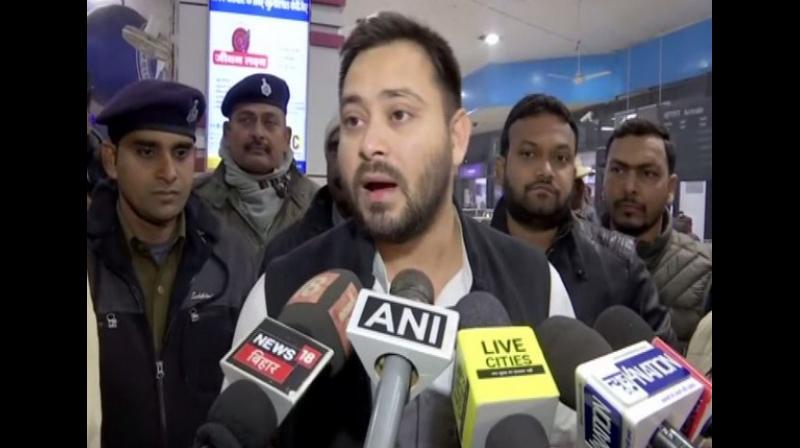 Tejashwi accused BJP of spreading hatred amongst communities and took on the party over issues like inflation and unemployment. (Photo: ANI)

Patna: RJD leader Tejashwi Yadav on Sunday said he was happy that the people of Jharkhand voted by keeping in mind the issues they faced in their everyday lives.

"We formed an alliance in Jharkhand and had great coordination. We fought the elections based on people's issues. I am happy that the people there voted by keeping in mind the issues faced by them in their everyday lives," he told reporters here.

Tejashwi was among the opposition leaders who attended the swearing-in ceremony of Jharkhand Chief Minister Hemant Soren at the Mohrabadi Ground in Ranchi.

Tejashwi accused BJP of spreading hatred amongst communities and took on the party over issues like inflation and unemployment.

"We are seeing that the country is in a state of an undeclared emergency. Hatred is being spread. Inflation is rising, unemployment has increased and GDP is falling. When Jharkhand was carved out from Bihar 19 years ago, BJP was in power for 16 years and had the opportunity to take the state to great heights. Instead, Jharkhand is lagging behind today," he said.

Tejashwi's RJD, which fought the Jharkhand Assembly elections in alliance with Congress and JMM, won a comfortable majority by securing 47 seats in the 81-member house.

The JMM won 30 seats, while Congress and RJD garnered 16 and one seat respectively.