India   All India  30 Dec 2018  Meghalaya rescue ops to resume with use of sophisticated equipment
India, All India

Meghalaya rescue ops to resume with use of sophisticated equipment

15 miners have been trapped in mine in East Jaintia Hills district since Dec 13, after water from nearby Lytein river gushed into it. 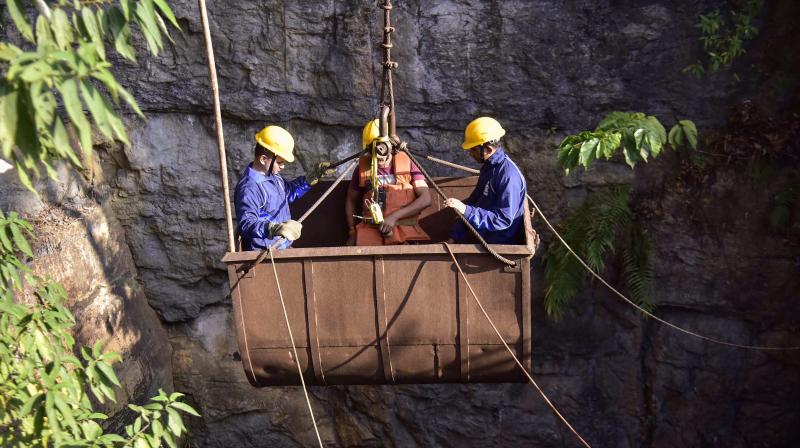 Navy personnel conduct a rescue task at the site of a coal mine collapse at Ksan, in Jaintia Hills district of Meghalaya on Saturday. (Photo: PTI)

Khliehriat (Meghalaya): The multi-agency operation to rescue the 15 miners trapped in a 370-foot-deep rat-hole coal mine is all set to resume on Sunday, officials said.

The miners have been trapped in the mine in the Ksan area of Lumthari village in Meghalaya's East Jaintia Hills district since December 13, after water from the nearby Lytein river gushed into it.

The IAF helicopter transporting sophisticated diving equipment of the Navy landed at a football ground in Khliehriat. The machines are to be shortly transported to the accident site, 37 km from here, Superintendent of Police (SP) Sylvester Nongtynger told news agency PTI.

The National Disaster Response Force (NDRF) is coordinating the rescue operations with the help of Navy, the NDMA and Coal India Ltd, he said.

The Navy divers are likely to go inside the vertical shaft of the rat-hole coal mine Sunday, the SP said. "The Navy divers have reported that they have the capacity to go a depth of 100 feet, whereas the NDRF divers can go to a depth of 30 feet," he said.

A 14-member Navy team led by Lt Commander R Khetwal and a 21-member Odisha Fire Service contingent have been visiting the site since Saturday, Asst Commandant Santosh Kumar Singh said. Singh briefed them about the conditions of the area and gave them a sketch of the mine and the nearby shafts.

A senior district official said few pumps of Coal India Ltd has arrived in Guwahati and are expected to reach the site soon.

Meanwhile, a group of Indian Navy divers arrived from Vishakhapatnam on Saturday to join operations underway to rescue 15 miners trapped in a flooded rat-hole coal mine in Meghalaya since December 13.

The 15-member team, equipped with specialised diving equipment, including a re-compression chamber and remotely operated vehicles capable of searching underwater, went straightway to the mine site in the remote Lumthari village in East Jaintia Hills district. They were briefed in detail by the NDRF personnel supervising the entire rescue operations since their arrival on December 14, a senior official of the East Jaintia Hills district said.

A team of rescuers with 10 high-powered Kirloskar pumps has also reached the spot from Bhubaneshwar, District Superintendent of Police Sylvester Nongtynger told PTI on Saturday.

Another 8 high powered pumps mobilised by Coal India Ltd are being taken by road and expected to arrive in another 2 to 3 days, North Eastern Coalfields general manager J Bora said on Saturday.

Pump manufacturing company Kirloskar Brothers Ltd and Coal India were jointly moving 18 high-powered pumps to drain water out of the 370-foot-deep mine. The rat-hole mine located on top of a hillock fully covered with trees had got flooded when water from the nearby Lytein river gushed into it on December 13, trapping the 15 diggers.

Pumping of water from the mine was suspended on Saturday last as there was no visible receding of the water level in it.