Jaish claimed many security personnel were killed and injured in the gunfight. 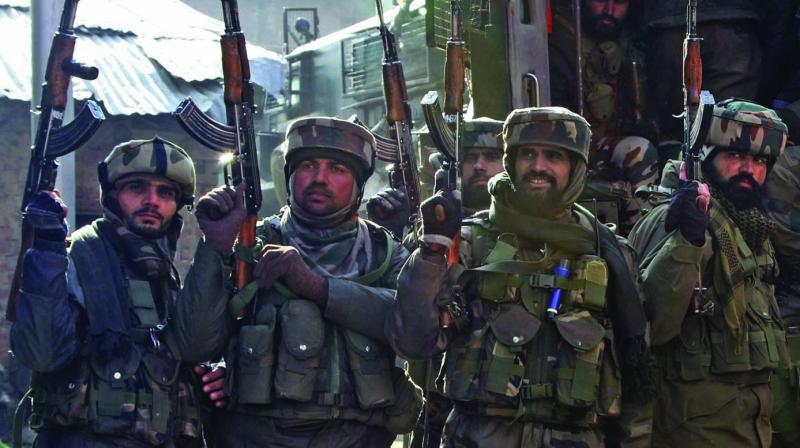 Army soldiers raise their guns to celebrate the killing of four top Jaish-e-Muhammad militants, including one Pakistani commander, at Hajin Payeen area of Pulwama district of South Kashmir on Saturday. (Photo: PTI)

Srinagar: Four Jaish-e-Muhammad (JeM) cadres were gunned down by the security forces in a cordon-and-search operation in J&K’s southern Pulwama district on Saturday, taking the death toll among militants for the year to 258.

Soon after the killing of militants, parts of Pulwama erupted with irate crowds taking to the streets and throwing rocks at the security forces. A boy was killed and at least 10 persons were injured when the security forces fired teargas canisters and pellet shotguns to quell the protesters and stone-pelting mobs, witnesses and hospital sources said. The police said one person was injured when hit by a stone during the clashes. Jaish claimed many security personnel were killed and injured in the gunfight. The authorities denied it and said the security forces did not suffer any casualties.

Giving details of the encounter, a police spokesman here said the security forces, including the Army’s Rashtriya Rifes, J&K police’s counter-insurgency Special Operations Group and the CRPF laid siege to Pulwama’s Hanjan Payeen after learning the presence of militants in the area. “As the searches were going on, the search party was fired upon by the terrorists. The fire was retaliated, leading to a gunfight,” he said.

Three of the slain militants were local Kashmiris identified as Muzzamil Ahmed Dar, Waseem Akram Wani and Muzzamil Nazir Bhut. The fourth man is believed to be a Pakistani national. Jaish named him as “guest mujahid” Muhammad Khalil Khan, who was known by his pseudonym Khalil Bhai.

Meanwhile, a 10-year-old boy was critically injured in a mysterious blast in Pulwama’s Gadoora area on Saturday afternoon. SSP Pulwama Chandan Kohli, confirming the incident, said the boy, identified as Arif Ahmed Dar, was fiddling with some explosive device which suddenly went off. He was rushed to a nearby hospital, and then shifted to Srinagar’s government-run Sri Maharaja Hari Singh Hospital for advanced treatment, the police said.

Separately, the Army on Saturday claimed to have averted a major militant strike after recovering two assault rifles and other ammunition during a search operation in Kathua district of the Jammu region.

A defence spokesman said in Jammu, the state’s winter capital: “At early hours, based on inputs from Military Intelligence (MI), a joint operation by Army Brigade at Samba & J&K police was launched at Galak in Billawar block of Kathua district today.” He added that in the search operations, one AK-47 and AK-56 rifle each with 256 rounds and four magazines, one hand grenade and 59 rounds of sniper ammunition were recovered.

“With these recoveries, a major possible terrorist strike planned in Jammu region has been averted,” the spokesman said.