Jharkhand coal mine collapse: 9 killed, many trapped; rescue work on

RR Mishra, officiating CMD of ECL, a Coal India arm, said that the mishap occurred at around 7.30 pm last night. 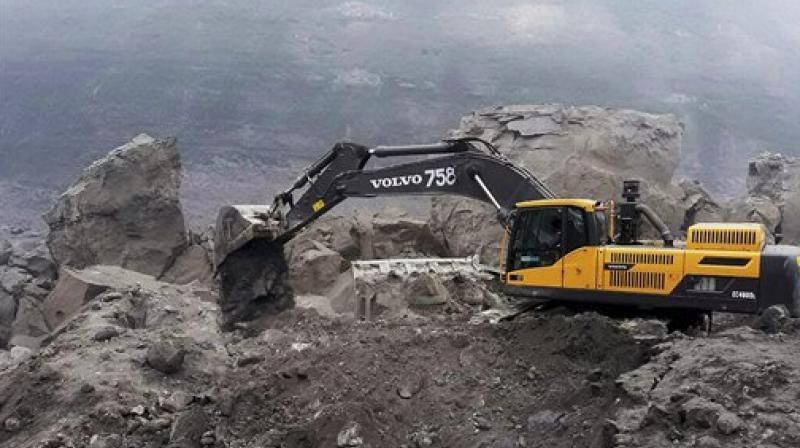 An excavator machine at work during the rescue operations at a coal mine, where several workers are trapped, in Godda, Jharkhand on Friday. (Photo: PTI)

Godda (Jharkhand): Nine miners were killed and some others feared trapped following a cave-in at Lalmatia opencast coal mine at Rajmahal area of Eastern Coalfields Ltd (ECL) on Thursday night.

"CMD, ECL, has reported that a total of nine bodies of workmen have been recovered from the accident site so far," a Coal Ministry statement said today, adding two injured persons were undergoing treatment.

RR Mishra, officiating CMD of ECL, a Coal India arm, said that the mishap occurred at around 7.30 pm last night when excavators were working there following which rescue operations was launched immediately.

Director General of Mines Safety and senior officials were there to supervise the rescue operation, Mishra said.

The statement said all 10 equipments excavators and dump trucks have been recovered.

An inquiry has been ordered by the Director General of Mines Safety and a high-level committee of experts has been constituted by Coal India to investigate the causes of the accident.

Das said an assistance of Rs two lakh will be given to the families of the miners who died in the accident while ECL also announced an ex-gratia compensation of Rs five lakh each to these families, in addition to the amount to be paid under the Workmen's Compensation Act.

The National Disaster Response Force (NDRF) was engaged for rescue & relief operations. "Saddened by the loss of lives at a mine in Jharkhand. My prayers are with those trapped inside. Spoke to CM Raghubar Das on the situation," Modi said on twitter.

"CMD, ECL has reported that an incident of overburden dump slide/subsidence has occurred in the second shift of December 29, at about 7.30 PM in the Rajmahal Open Cast Expansion Project in district Godda, Jharkhand....," the statement said.

Godda is about 250 kms from state capital Ranchi.

All the necessary help to the families of the deceased is being extended by ECL, it said.

"Prima facie, it is observed that the incident is unprecedented, since an area of 300 m length by 110 m wide solid floor of the Over Burden dump area has slid down by about 35 m involving around 9.5 million cubic meters of earth material. This could be due to failure of the bench edge along the hidden fault line/slip," the statement said.

Senior management of ECL and state government officials have been supervising the rescue operations since last evening, it added.

A control room has been set up at the project office of Rajmahal Open Cast Expansion Project of ECL and R R Amitabh, GM, Mining is in-charge of control room.

Goyal said that he was monitoring the rescue operation since last evening with the Chief Minister.

Finance Minister Arun Jaitley said in a tweet "Saddened by the loss of lives in Jharkhand's #Lalmatia coal mine collapse. My prayers for recovery of injured & solace to bereaved families."