Pragya forced to apologise in LS twice over Godse remark

Bhopal MP privilege notice on Rahul for calling her a ‘terrorist’. 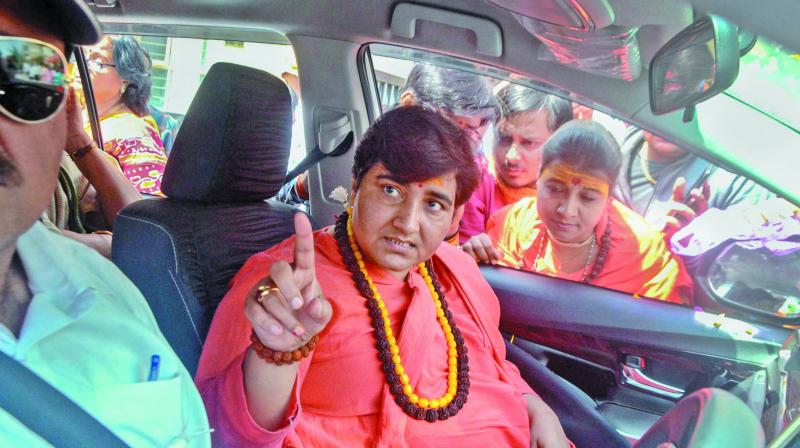 New Delhi: After setting off a nationwide furore by calling Mahatma Gandhi’s assasin Nathuram Godse a “patriot”, controversial BJP MP and terror accused Pragya Singh Thakur, amid unrelenting pressure from the Opposition, was forced to apologise for her remarks twice in the Lok Sabha on Friday.

The BJP member from Bhopal, earlier Friday morning, offered an “apology”, but this was swiftly rejected by the Opposition as she only expressed “regret” and tried to turn around the issue by attacking Congress MP Rahul Gandhi for calling her a “terrorist”.

Later in the afternoon, after Speaker Om Birla convened a meeting of all parties’ floor leaders, it was decided that Ms Thakur would read out her apology from a text that was approved by all parties.

Half an hour after the Lok Sabha reconvened post lunch, Ms Thakur reached the House and read out the apology.

She began by saying she had faced a lot of attacks from her “enemies”. but immediately Congress’ Lok Sabha leader Adhir Ranjan Choudhury along with many other Opposition leaders protested, at which point the Speaker asked her to read out from the prepared text.

Ms Thakur again pleaded that she wants to put across her views as earlier too she could not convey her views, but Speaker Birla asked her to stick to the text. At this point, she said during the discussion on the SPG Bill on November 27 “I did not call Nathuram Godse a patriot and I did not even take his name. but still if it has hurt somebody, then I apologise while expressing my regret”.

She again tried to say something beyond the text, but the Speaker turned off her mike. Her first apology was panned by Opposition parties for its reference to other issues, as they insisted on an unconditional apology.

The BJP MP targeted Rahul Gandhi without naming him and also claimed that her comments were twisted.

Earlier in the House, she had said she respects and pays tribute to Mahatma Gandhi for his contribution to the country. Ms Thakur also said: “One member has publicly termed me a terrorist, though I have not been convicted by the court... It is an insult to a woman and a sadhvi,” and added that making such remarks too was against the law. Ms Thakur is an accused in the Malegaon blast case.

Embarrassed by her remarks, the BJP’s top leadership summoned ms Thakur on Friday morning. In Parliament, BJP working president J.P. Nadda and parliamentary affairs minister Prahlad Joshi met her, after which it was decided she would read the statement in the Lok Sabha. At this meeting, sources said, it was also decided she will move a breach of privilege notice to the Speaker against Rahul Gandhi for calling her a “terrorist”.

Sources said Ms Thakur later moved a privilege notice against Mr Gandhi in the Lok Sabha for calling her a “terrorist”. The Speaker will later take a call on whether to admit the notice.

The BJP had swung to control the damage on Thursday with disciplinary action as it removed her from a consultative committee on defence, and also barred her from attending its parliamentary party meetings during the ongoing session. The Congress led the Opposition charge against her with Mr Gandhi accusing her of being a “terrorist” and claiming her comments represented the “heart and soul” of the saffron party and its ideological mentor, the RSS.

Though the House functioned on Thursday after senior BJP leader Rajnath Singh said his party condemns any philosophy which describes Gandhi’s killer as a patriot, the Opposition parties insisted on an apology from her on Friday. Ms Thakur had not attended the Lok Sabha proceedings on Thursday.

Outside Parliament, Rahul Gandhi brushed aside Ms Thakur’s attack on him and asserted that he stood by his remarks accusing her of being a “terrorist”. He said he was ready to face any action.

The Congress leader also claimed Ms Thakur believes in violence, the way Nathuram Godse did. “Yes, I stand by my statement. What I have written on Twitter, I stand by it. Yes,” he told reporters when asked if he stood by his statement against Ms Thakur.

Asked about the BJP calling for action against him for his remarks, Mr Gandhi said: “That’s okay. There’s no problem. Whatever they want to do, I’ll welcome.”