India   All India  30 Nov 2019  'Pakistan will not succeed in proxy war': Rajnath Singh
India, All India

'Pakistan will not succeed in proxy war': Rajnath Singh

Rajnath Singh said that India does not have any extra terrestrial ambitions. 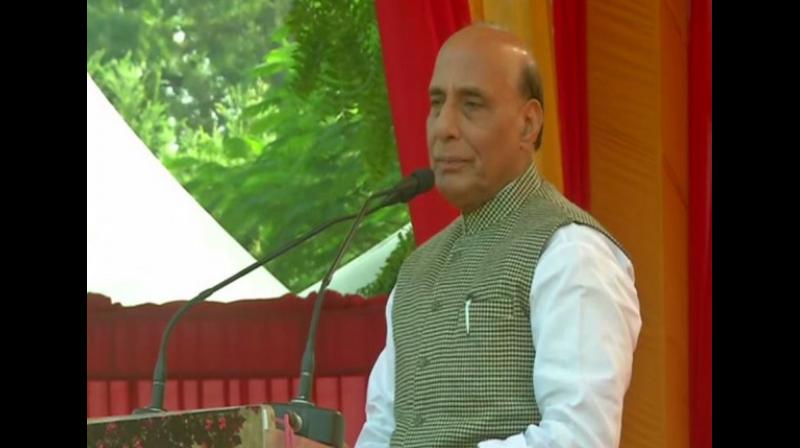 Singh said that the government is committed to ensuring India's territorial integrity and sovereignty and added that no civilised country could sympathise with propagators of terrorism. (Photo: ANI)

Pune: Defence Minister Rajnath Singh on Saturday said India does not have any "extra-territorial ambitions" and added that it would not spare anyone who messes with it.

Speaking at the passing out parade ceremony of National Defence Academy (NDA) here, Singh said that the country does not interfere in the affairs of other nations.

"India has always believed in having peaceful and friendly relations with all countries. We have no extra-territorial ambitions, nor do we interfere in the affairs of other countries. But when someone provokes us, we will not let them get away with it," he said.

The Defence Minister said that Pakistan has used terrorism to wage a 'proxy war' against India.

"But I can assure you with full responsibility that Pakistan will not succeed in its proxy war," he said.

Singh said that the government is committed to ensuring India's territorial integrity and sovereignty and added that no civilised country could sympathise with propagators of terrorism.

He hailed the security forces for their service to the country and ensured that the government is doing everything possible to strengthen the forces.

"You can rest assured that now you and your family are an integral part of my extended family," he said.

Singh added that "the resolve to protect the Constitution is the common thread that binds military leadership to civilian leadership."