Treated as ‘furniture’ in BJP: 2 Odisha MLAs resign from party 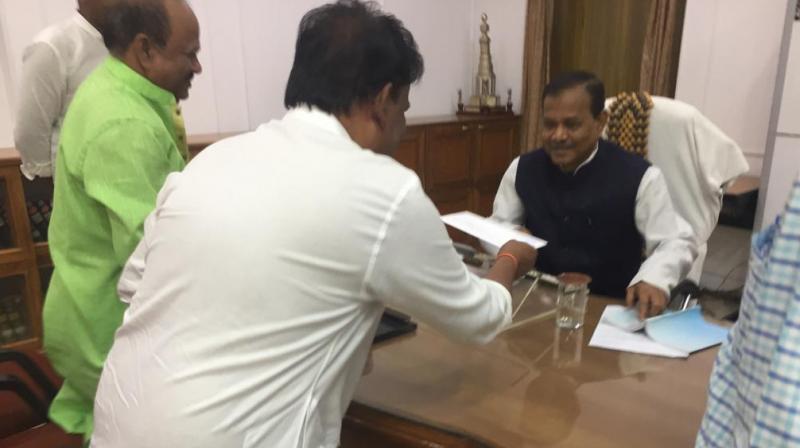 Both the leaders had for a long been alleging delay in construction of a second bridge over the Brahmani river, establishment of a super-speciality hospital in Rourkela and lack of job opportunities for local youths in Paradip oil refinery. (Photo: ANI)

Roy said he called on Assembly Speaker Pradip Amat on Friday morning and tendered his resignation from the membership of the House.

"It is with deep anguish that I have decided to quit as the member of State Legislative Assembly as well as from the membership of Bharatiya Janata Party (BJP)," Roy said in a twitter post.

Both the leaders had for a long been alleging delay in construction of a second bridge over the Brahmani river, establishment of a super-speciality hospital in Rourkela and lack of job opportunities for local youths in Paradip oil refinery.

Mohapatra told reporters that the interest of the state is important and their future course would be announced after about a fortnight.

He also alleged that their suggestions and views were ignored by the party.

In the resignation letter to the BJP national president, Roy and Mahapatra said, "We regret to state that despite repeated efforts in appraising you on the sorry state of affairs of the party here, neither you nor any senior central party leader bothered to consult, review or take corrective measures.”

“Be it the Mahanadi water issue or the unfulfilled promised of a second bridge over the Brahmani river, the super-speciality hospital at Rourkela or the dreams of lakhs of jobs for Odia youth which we sold at Paradip during the inauguration of the Oil Refinery - nothing, absolutely nothing materialised," the letter mentioned.

The letter claimed that the people of Odisha were "disillusioned."

"Several leaders in the party here shared our concerns, but remain silent fearing denial of tickets. You would agree that such silence is a bad sign for any democratic party," it said.

"Well-meaning suggestions by us were construed as a threat by certain ego-centric self-serving politicians who resorted to dirty tricks and a campaign was launched in our respective constituencies to try and deride us," the letter said.

The two leaders stressed that they guard the interest of the people of the state and their constituency, to whom they are answerable.

Describing defeat of the party with a margin of 40,000 votes at Bijepur bypoll a "shocker", they said this reflected the "disenchantment" of the people with the BJP because of the manner in which the party was functioning.

Roy said due to the charismatic presence of Prime Minister Narendra Modi and the progressive change of BJP, he had envisioned development works for Rourkela and had promised to fulfil the long-ignored dream and aspirations of the people who had reposed their faith in him.

"Now, I acknowledge my failure in living up to their expectations and therefore, taking the moral responsibility, I have decided to quit as the member of the state Legislative Assembly as well as from the membership of BJP," Roy said.

He also said that he has decided not to contest 2019 Odisha Assembly election from Rourkela. Reacting to the development, BJP state unit president Basant Panda said the party would not be affected by their resignation.

Senior BJP leader Golak Mohapatra alleged that the two leaders had been working as "outsiders and they never considered themselves as partymen."