Rahul Gandhi said PM like actors does not need any contact lens for tears to roll down his eyes. 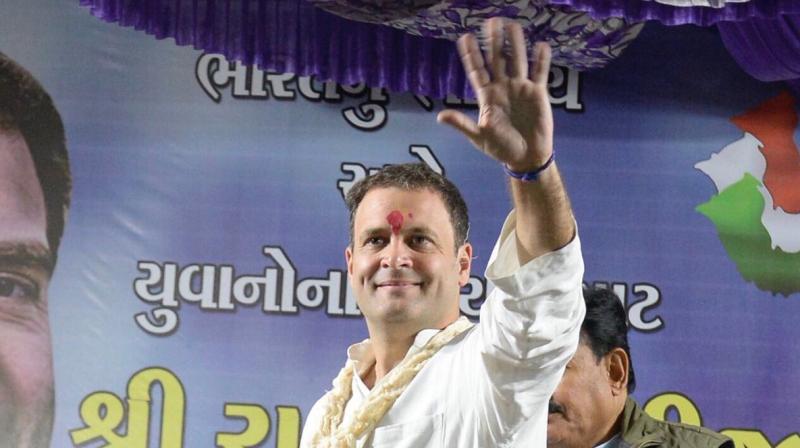 Visavadar/Amreli:  Beginning his two-day tour of poll-bound Gujarat with a visit to the famous Somnath temple, Rahul Gandhi on Wednesday took a swipe at Prime Minister Narendra Modi over his emotional exhortations, calling him an "excellent actor better than Amitabh Bachchan".

Addressing three rallies at Visavadar, Savarkundla and Amreli in the Saurashtra region, Gandhi also reached out to Patidars and attacked Modi over his "silence" on Rafale deal and "proximity" to select industrialists.

Before setting out on the campaign trail, Gandhi offered prayers at the famous shrine of Lord Shiva at Somnath.

"Narendra Modi is a 'zabardast' (excellent) actor, even better than Amitabh Bachchan. Generally, an actor has to put contact lens when he has to weep...His eyes burns and tears roll down. But Narendra Modiji does not need any contact lens for tears to roll down his eyes," Gandhi told a rally at Savarkundla.

At Visavadar, Gandhi referred to the 2015 quota stir in which 14 members of the Patidar community were killed in police firing and said if anyone raises his voice he either gets beaten up or has to face bullets in Gujarat.

"All the communities are raising their voice here against the government. But what do you get if you raise your voice in Gujarat? You are beaten up, you have to face bullets," Gandhi said.

Visavdar is a Patidar-dominated constituency in politically crucial Saurashtra region.

"I asked Modiji three questions (on the Rafale deal). First, is there a difference in the cost of the planes in the first and the second contract (signed with a French firm), please give the reply in yes or no. Why was the contract given to a private industrialist friend instead of Hindustan Aeronautics limited (HAL)? And did you seek the approval of the Cabinet Committee on Security for the deal?" Gandhi asked, referring to the deal between French firm Dassault Aviation and a company headed by Anil Ambani.

The Congress vice president also sought to know if due procedure was followed before formalising the deal with France in 2016 for procuring the fighter jets.

Gandhi alleged that the Prime Minister was "avoiding" answering his questions "out to fear" that the "truth" would come out before the crucial polls in his home state.

"Narendra Modiji is not replying to these questions because he wants that the truth of Rafale and Jay Shah (son of BJP chief Amit Shah) should not come out before the people ahead of the Gujarat elections," he said.

Targeting Modi, Gandhi said, "You will see how tears again flow from the eyes of this actor 2-3 days before the elections. He will talk about everything but will not utter a word regarding how much price farmers receive for their produce in Gujarat, loan waiver, or how to convert black money into white".

In an emotional speech post demonetisation, Modi had said that people can hang him if he cannot bring black money back.

In an emotional outreach during canvassing, Modi had recently said that Gujarat is his mother and he her son.

Gandhi said the Gujarat government is run by Amit Shah and Chief Minister Vijay Rupani is just the "rubber stamp".

He claimed the NDA government delayed the winter session of Parliament as Modi was not ready to discuss the Rafale deal and Jay Shah issue before the Gujarat polls.

"Generally, Parliament's (winter) session is held every year in November and discussions take place in Lok Sabha and Rajya Sabha. But, due to two reasons, Parliament is opening after the Gujarat polls this time," Gandhi said.

He also criticised the Modi government on the issues of farmers and unemployment in the BJP-ruled Gujarat.

The Congress vice president alleged that entire land was given to "5-10 industrialist friends of Modi" in Gujarat but farmers were left high and dry.

He even read out names of the villages during his speech.

He alleged that Modi has reneged on his promise to offer higher MSP to farmers on cotton and groundnut.

"Modi no longer speaks about these things in his speeches," he said.

Gandhi will visit various towns and villages in Amreli, Bhavnagar and Botad districts on Thursday and address a rally on the outskirts of Bhavnagar city in evening.