According to police official, all four terrorists killed belonged to Lashkar-e-Taiba (LeT). 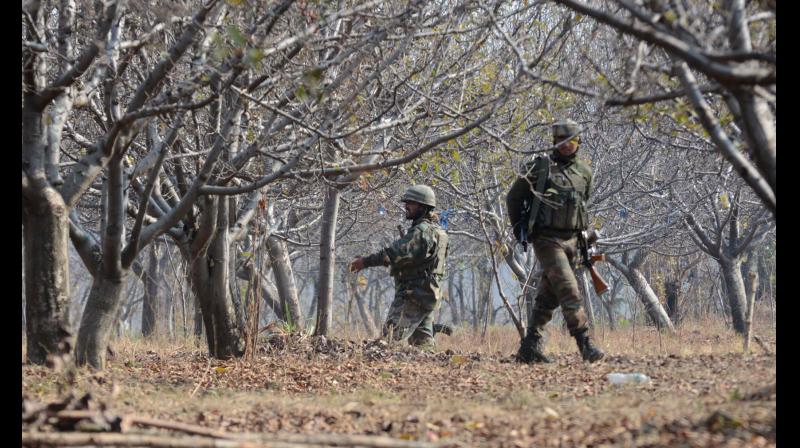 Security Forces in action during encounter in Futlipora village of Pakharpora in central Kashmir's Budgam district. (Photo: H U Naqash)

Srinagar: Four militants were gunned down by security forces in two separate encounters in Jammu and Kashmir on Thursday. The police said all of them belonged to Lashkar-e-Taiba (LeT) and among them was a commander of the outfit identified by it as Pakistani national Muzzamil.

Three militants were killed in a fire fight in Futlipora village of Pakharpora area of the Valley’s central district of Budgam, the Army and J&K police officials said here.

A fourth militant was shot dead by the security forces in Sagipora woods outside north-western town of Sopore in Baramulla district. The slain man has been identified as Muzamil, a resident of Pakistan, the police said. A soldier of the Army's 9 Para was injured in this clash.

Meanwhile, the statistics released by the police said that for the first time in seven years more than 200 militants have been killed by the security forces, so far, in 2017.

J&K’s Director General of Police, Shesh Paul Vaid corroborating it wrote on Twitter, “Today by the collective effort of @JmuKmrPolice, Indian Army, @crpfindia, CAPF and people of Kashmir have led to neutralisation of more than 200 militants in the year of 2017 alone.”

In another tweet, he said “This marks a huge landmark for establishing peace and stability in the state of J&K and our country.”

The Army and police officials said that the security forces from J&K police’s counterinsurgency Special Operations Group (SOG), the Army’s 10 Garhwal and the CRPF laid siege to Futlipora at dawn on Thursday after receiving specific inputs about the presence of militants in the village. Defence spokesman, Colonel Rajesh Kalia, said that four militants were killed during the encounter.

However, Budgam’s SSP Tejinder Singh said that only three bodies along with weapons were found at the encounter site.

A statement issued by the  J&K police in the evening said that all the four militants including a commander killed in Futlipora and Sagipora encounters belonged to Lashkar-e-Taiba (LeT). The statement confirmed that only three militants were killed at Futlipora including Shabir Ahmed Dar, a resident of Pulwama’s Thokarpora. It added that three AK rifles with 3 magazines and 111 rounds and other ammunition were found on slain men.

While the security forces were encircling a private house where militants were hiding, the latter opened fire at them, triggering encounter, the officials said.

Soon surging crowds of the locals, mainly youth, while chanting pro-freedom began marching towards the encounter site but they were intercepted by the security forces at the main square of Pakherpora township.

The angry youth who apparently wanted to disrupt the cordon-and-search operation with the intention to help the holed up militants hurled stones at the security personnel, said a police official.

He added that the protesters torched a private pickup van which was being used by the security forces in the operation. The police and other security forces fired rifles and pellet shotguns and also burst teargas canisters to quell the violent protesters, the witnesses said.

Eight protesters were injured in the use of live ammunition, said an official at the government-run health centre at Pakharpora where the injured were admitted. Five of them have been hit by pellets and the rest have received bullet wounds, he added. One of the seriously injured, a 15-year-old boy, was shifted to a Srinagar hospital later, a report said.

The internet services in the Budgam and neighbouring Pulwama disrict were suspended “to prevent anti-social and anti-peace elements from using social media platforms” to incident violence in the backdrop of the encounter at Futlipora and subsequent clashes in the area, the official sources here said.

In a separate clash reported from Zaloora top in Sagipora woods outside Sopore town, one militant was killed and an Army Para commando injured. The defence spokesman here said that the SOG, Army’s 22 Rashtriya Rifles and 9 Para and the CRPF’s 92, 177 and 179 battalions launched a cordon-and- search operation in the area after inputs about the presence of militants.

Deputy Inspector General of Police (Baramulla) BK Virdi confirmed the killing of one militant and injuries to a soldier from 9 Para during the fire fight and said that the contact between the militants and the security forces was established soon after the cordon-and-search operation was launched in the area.

The police said that one AK rifle with 5 magazines and 124 live rounds of ammunition, one Underbarrel Grenade Launcher (UBGL) with  5 rounds and other ammunition were recovered from the encounter site.

However, there has been an increase in civilian killings in militancy-related violence. While 14 civilians were killed last year, the number rose to 54 this year. On the other hand, as many as 77 security personnel laid down their lives while fighting militants or in militant attacks so far this year. Eighty-eight security personnel had been killed in 2016.