The Singaporean defence minister emphasised the need for concerted regional and global efforts to deal with terrorism. 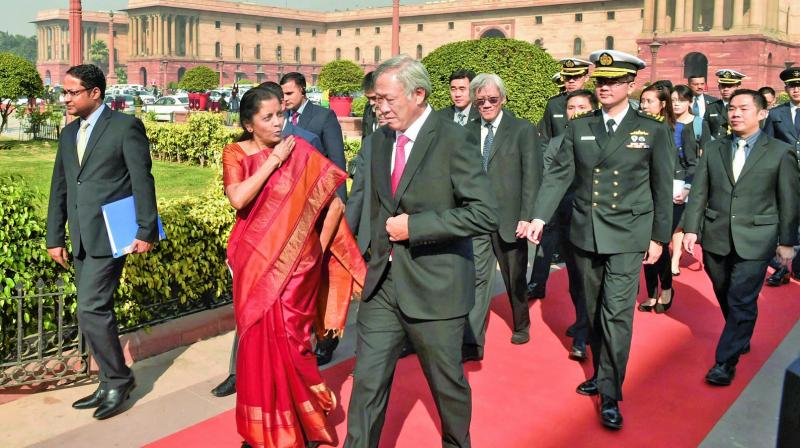 New Delhi: In an important pact to add much more depth to bilateral maritime security and defence ties, India and Singapore on Wednesday inked an agreement which acquires significance amid China’s increasing military manoeuvres in the Indo-Pacific region.

During the wide-ranging talks between defence minister Nirmala Sitharaman and her visiting Singaporean counterpart Ng Eng Hen, the two countries declared an intent to ensure freedom of navigation in critical sea lanes besides boosting overall military cooperation with a particular focus on combating terrorism.

The pact on naval cooperation provides for increased engagement in the maritime security sphere, joint exercises, temporary deployments from each other’s naval facilities and logistics support.

Calling the talks “overwhelmingly successful and productive”, the Singaporean defence minister emphasised the need for concerted regional and global efforts to deal with terrorism and other challenges such as tackling chemical and biological weapons.

A joint statement issued after the talks referred to regional security scenario in the maritime domain, with both ministers reaffirming the importance of maintaining freedom of navigation and trade consistent with international law.

Both sides also signed the revised Defence Cooperation Agreement to further strengthen the longstanding defence relationship between the Singapore Armed Forces and the Indian military.

However, Mr Ng, speaking at a think-tank on Tuesday, had expressed Singapore’s reservation over the proposed quadrilateral coalition of India, the US, Japan and Australia.

The two ministers also discussed Singapore’s proposal to expand the Code of Unplanned Encounters at Sea to all ADMM (Asean Defence Ministers’ Meeting)-Plus countries as well as to establish guidelines for air encounters between military aircraft, the statement said.

The pact also underscored areas like aerospace and electronics among other areas of mutual interest between the defence industries of both countries for enhanced collaboration.

The Singaporean defence minister also expressed his appreciation for Prime Minister Narendra Modi’s acceptance to be the keynote speaker at the 2018 Shangri-La Dialogue.