TN State Disaster Management Agency said that the depression is likely to intensify further into a cyclonic storm during the next 12 hours. 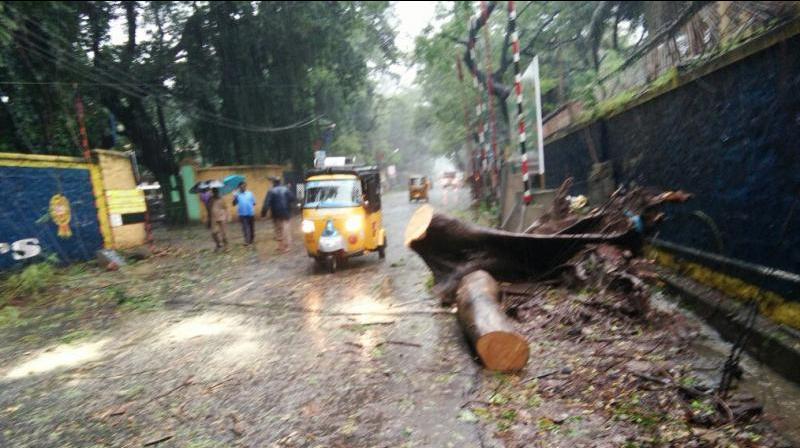 There were also reports of atleast 50 trees being uprooted by strong winds. (Photo: Twitter | @tnsdma)

Chennai: 4 people were killed as heavy rains and strong winds battered parts of Kanyakumari. India Meteorological Department (IMD) has issued an alert of heavy rainfall in the town and several other places in Tamil Nadu.

Cyclone Ockhi, lashing parts of Tamil Nadu and Kerala with torrential rains and gusty winds, was approaching the Lakshadweep archipelago, a top official at the Ministry of Earth Sciences said on Thursday.

Madhavan Rajeevan, secretary in the ministry, said the archipelago in the southern part of the Arabian Sea will start experiencing heavy rainfall and strong winds from Friday.

"It will hit the islands on December 2," Rajeevan said.

The cyclonic storm was "very likely" to move west-northwestwards towards Lakshadweep Islands and intensify further into a severe cyclonic storm in the next 24 hours, the Cyclone Warning Division of IMD warned.

The IMD said heavy-to-very-heavy rainfall at isolated places were "very likely" over south Tamil Nadu, south Kerala during the next 24 hours.

Tamil Nadu State Disaster Management Agency said that the depression is likely to intensify further into a cyclonic storm during the next 12 hours.

Heavy winds with speed reaching 45-55 kmph gusting to 65 kmph likely along and off Kanyakumari, Tirunelveli,Thoothukudi, Ramanathapuram and Pudukottai coasts.

Depression over Comorin area intensifies into deep depression.Likely to form into a cyclonic storm during next 12 hours. #Kanyakumari, #Tuticorin #Ramanathpuram fishermen advised not to venture into Sea. See attachment for more details. pic.twitter.com/A3LrCGF2aR

Squally wind speed reaching 55-65 kmph and gusting to 75 kmph was very likely along and around Lakshadweep Islands during the next 12 hours and may increase thereafter with wind speed becoming 80-90 kmph gusting to 100 kmph from Thursday night.

Sea conditions would be "very rough to high" over and around Lakshadweep Islands during the next 12 hours and "high to very high" during subsequent 48 hours, the IMD added.

There were also reports of atleast 50 trees being uprooted by strong winds in Kanyakumari. At two locations, mobile towers were damaged.

Fishermen have been advised not to venture into the sea along and off south Tamil Nadu, south Kerala coasts and Lakshadweep islands.

Schools in seven districts of the state including Thoothukudi, Tirunelveli, Kanyakumari, Virudhunagar were closed. 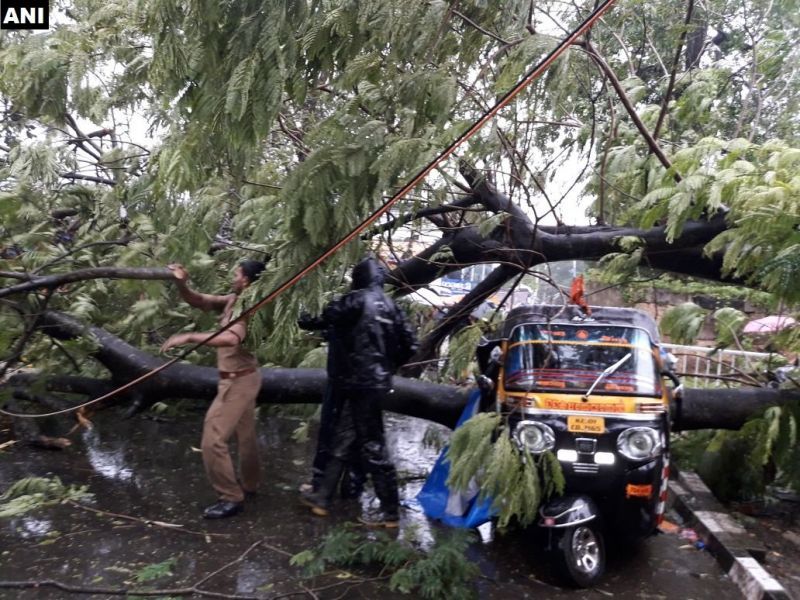