Two Army and five soldiers were killed and half a dozen others wounded in the attack. 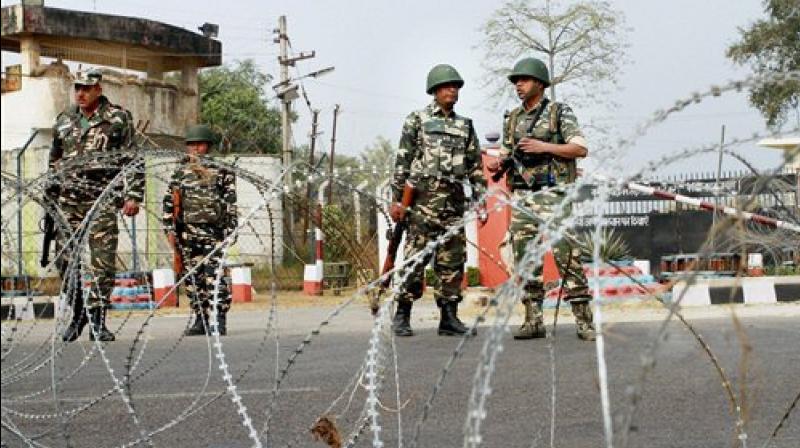 Srinagar: Army Chief General Dalbir Singh Suhag on Wednesday visited Nagrota army base where a terror attack claimed the lives of two officers and five soldiers and left half a dozen other soldiers injured a day earlier.

The Army Chief was briefed by the local commanders on Tuesday’s attack even as combing operations at the base were underway and live or unexploded bombs left behind by the three slain militants were being defused.

“The combing operations were resumed on Wednesday morning to ensure there are no more terrorists hiding within the Army unit. Also blinds (unexploded shells) are being destroyed at the site by the bomb disposal squad,” the spokesman of Army’s Nagrota-based 16 Corps, Lt. Col. Manish Mehta, said.

Two Army majors Gosavi Kunal Mannadir and Akshay Girish Kumar and five soldiers were killed and half a dozen others wounded when a group of three heavily-armed militants wearing police uniforms targeted the Army’s 166 Medium Regiment unit located 3 kilometres from the 16 Corps headquarters at Nagrota which is about 13-km north of Jammu and Kashmir’s winter capital Jammu on Tuesday. The trio forced its entry into the Officers Mess complex by throwing grenades and firing at the sentries.

Major Mannadir and three soldiers of the Army were slain in the initial militant attack and counter-action and Major Kumar. The two jawans laid down their lives while rescuing 12 other soldiers and their family members including two women and two children trapped inside two buildings where a hostage like situation had been created after militants stormed into these. The 14-hour-long standoff ended with the killing of all the three militants.

A wreath-laying ceremony was held at Nagrota along the Jammu-Srinagar highway on Wednesday which was attended besides others by Chief Minister, Mehbooba Mufti. After laying wreaths on the caskets containing the mortal remains of the seven soldiers she reiterated "the cycle of violence has brought immense miseries to the people of the State who want an end to it.

The terror attack took place on a day when the BSF foiled an infiltration bid in Chamliyal area of Ramgarh Sector along the International Border in J&K’s Samba district and about 70-km southwest of Nagrota after killing three militants and forcing others in the group to flee back to Pakistan.

The BSF said on Wednesday that the infiltrating militants had planned to carry out a chain of terror attacks by blowing up running trains and tracks with chained IEDs and hard to detect liquid explosives. They were carrying five bottles of liquid explosive trinitroglycerin.

"Militants had infiltrated to carry out big incidents. Their design was to blow up rail tracks and trains here as we have recovered chained IEDs and liquid explosives", Additional Director General (ADG) BSF and Special DG (Western Command) Arun Kumar said at a press conference in Jammu.

He added the slain militants would have carried out a chain of big impact terror incidents including blowing up of "running trains" and causing fire in trains as chain IEDs and liquid explosive are meant to blow up tracks and cause fire.

He said, "Had our jawans not successfully contained and eliminated these heavily armed terrorists with huge stores of explosive material, they could have caused massive damage in the mainland". He also said, “It was only because of BSF's multi-tier security cover that this calamity was averted."

IG BSF Jammu Frontier D K Uphadayaya added, “Chain IEDs are mainly used to blow up rail tracks and hit running trains. They were carrying with them five bottles of liquid explosive that contained trinitroglycerin. It is used to cause explosion and trigger fire".

The other arms and ammunition found on the slain men included three AK-47 rifles with 20 magazines and 514 rounds, a pistol with a magazine and 16 pistol rounds, 31 live grenades, 10 IEDS including 5 IED waist belts, five chain IEDs (used to blow up railway tracks), Global Positioning System (GPS), one mobile, two wireless sets with chargers, two knives, dressing rolls and jackets each, 3 bags and gloves each, one head gear and lighter each, 5 dry fruit packets and Pakistan made eatables, the officials said.